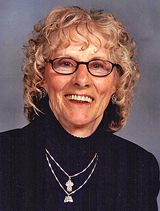 Marion Aletha Close of Napanee at age 96 was reunited with her late husband Donald Steward Close and now is in the presence of our Lord Jesus Christ. She leaves behind her daughter Judith Ann McCracken (Barry) of Bath and was a proud grandmother of Ryan (Crystal) and Jacob (Natalie) as well as great grandmother to Dexter, Hazel, Violet, Kenzie and Riley. Sisters she leaves behind are Lillian ( nee) Frizzell (late Walter Howes) of Napanee; Doreen (nee) Frizzell (Floyd Gurnsey) of Moscow; Louise (nee) Frizzell (late Ralph Henderson); Margaret (nee) Frizzell (Claire Steele) of Napanee; and her brothers Gary Frizzell (Nora) and Morley Frizzell (Elaine) both of Tamworth. Predeceased by her siblings Myrtle (nee) Frizzell (late Don Bird); Helen (nee) Frizzell (late Garnet Brown); Herbert Frizzell (Susan) of Belleville; Earl Frizzell (Joyce) and Juanita Frizzell (Johnny Snelgrove) of Kingston and late Gerald Frizzell (late Mariam). Marion lived with her husband and daughter in Tamworth for many years before moving to Napanee where they lived on West Street. She stayed in her home until moving to The John M Parrott Centre in 2014 where she spent her final years in comfort. Many thanks to the staff of the home for her excellent care. Due to current health concerns, a visitation and memorial service will be held when conditions allow, to be announced. Memorial donations made to the Alzheimer Society or the John M Parrott Centre in lieu of flowers would be appreciated by the family. In the care of Hannah Funeral Home, in Napanee (613-354-3341)