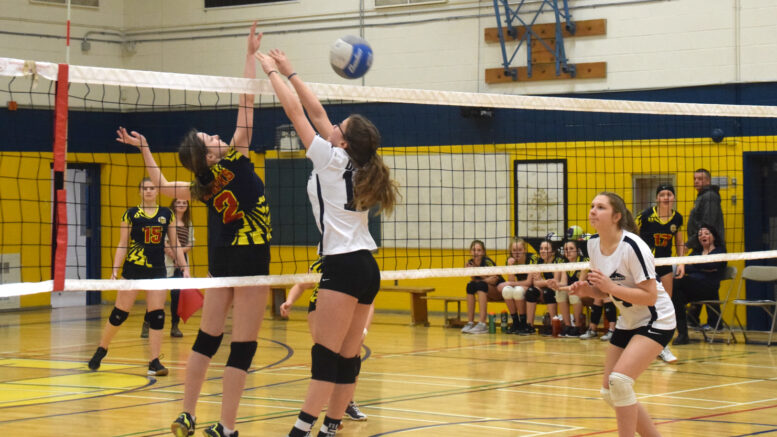 NDSS’ junior girls volleyball team will look to become the first Golden Hawks volleyball team in 20 years to advance to a KASSAA final when they face-off against the KCVI Blues this afternoon at home at 3:45 p.m.

After wrapping up an 11-0 regular season, the Hawks took care of the Marie-Rivier Dragons in three straight sets, 25-11, 25-4 and 25-13 in Wednesday’s KASSAA quarter-finals.

Napanee was particularly strong in the middle set, going on long scoring runs courtesy of aces from Emily DeRoche and Taylor Baker. Napanee closed out the set with nine straight points from the serves of Dakota Weese. NDSS’ Dakota Weese led a 9-0 scoring run for Napanee to close out the second set. Photo by Adam Prudhomme.

“They bought into a winning season right at the start of season,” Hawks head coach Jill Ardern said of the team. “We have a group of Grade 10s that are great leaders.”

Along with going unbeaten in league play, Napanee also captured three of four tournaments they entered this year.

“It’s been an incredible season and it’s really great for NDSS volleyball,” said Arden. “There’s a lot of committed coaches here. It’s fun to hear the enthusiasm from colleagues. It’s fun to come to the gym every day and it’s a really great experience.”

While the talent is there, Ardern says it’s the commitment from the players that has really allowed them to turn in what has been one of the best seasons for the school’s volleyball program in decades. NDSS’ Sam Smith (left) gets set to smash a ball over a Dragons’ defender. Photo by Adam Prudhomme.

A win this afternoon would give them another shot at capturing the local high school title. NDSS’ Branwyn Lupton leads to get a little extra on her serve. Photo by Adam Prudhomme.

“It’s been 20 years so I really hope the girls can pull it off,” said Ardern. “They have the mentality to do it and the drive and the will. I hope we can earn a berth to the KASSAA championship 20 years later.”

The winner of this afternoon’s semifinal will play the winner of the Frontenac and La Salle semifinal on Sunday at 3:30 p.m. in a game held at Kingston’s Queen’s University.