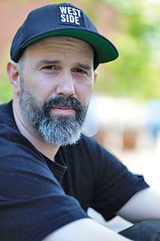 Brendan Smyth was an exceptional photographer, an experienced world traveller, a talented musician, an organizational and technical guru, a fearless skateboarder and snowboarder, a confidant, mentor, friend, husband, brother, and son. One of his Instagram personas, @WhereMyFeetHaveTakenMe, shared a fraction of his creative output but was also a great example of how he lived his life — eagerly seeking out adventures around the world. Indeed, Brendan’s feet took him to many incredible places. Sometimes, however, feet take you places you never intended to go. In 2017 Brendan developed a rare form of cancer (solitary fibrous tumour). Complications during the surgery to remove the tumour resulted in Brendan almost losing his leg. Yet, months of demanding physical therapy and rehabilitation finally allowed him to walk again and to return to the photography work that he loved. Unfortunately, the cancer reappeared. In spite of the situation, Brendan made every day count and continued to make time for his friends and family. He had a permanent impact on so many people and we were left behind as he embarked on his final adventure. Brendan is survived by his wife (Arisa), father (Grant Smyth), mother (Betty Anne Armstrong) and brother (Sean Smyth). Funeral service and cremation took place in Toronto on February 5, 2020.