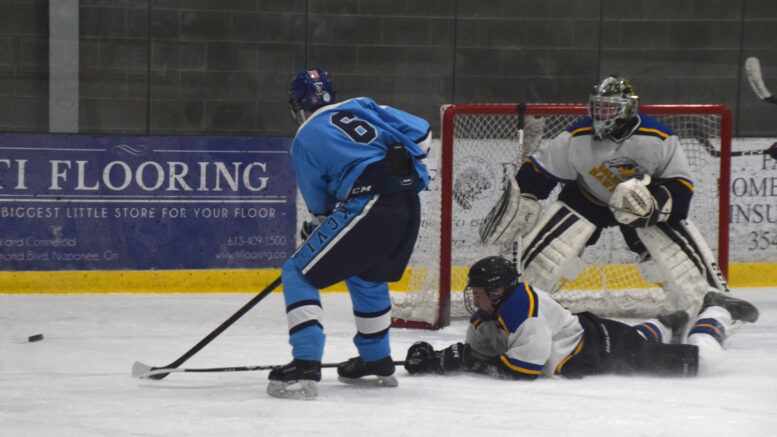 NDSS' Corbin Gibson dives to poke the puck away from a KCVI skater in front of the Hawks' net during Monday's KASSAA league game at the SPC. Photo by Adam Prudhomme.

It was a clash of the KASSAA boys’ hockey titans at the SPC on Monday when the NDSS Golden Hawks hosted the KCVI Blues.

Despite a fast start from Napanee, the Blues were able to rally for a 4-2 victory to climb to a tie atop the KASSAA standings.

Johnny Hearns scored first for the Hawks to give them a 1-0 lead. The Blues were able to shut down for the most part from there, allowing only a second period goal from Isaac Brown the rest of the way. Try as they might, Napanee just couldn’t generate any offense, never quite able to finish their play. The Blues offense meanwhile notched four goals and held on for the 4-2 win.

Napanee will next take Bayridge on Wednesday afternoon in Kingston. That game was their final scheduled match before the exam break with the season set to resume on Feb. 5.

NDSS’ girls hockey team meanwhile cruised to a 7-0 win over Sydenham on Monday. They enter the exam break at 4-1 on the season, tied for second with Frontenac and one point back of Holy Cross for first.