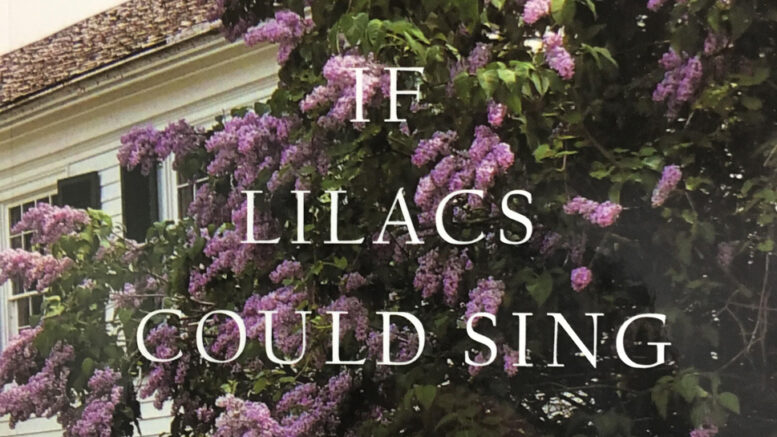 The cover of Steve Medd's latest book, If Lilacs Could Sing, which he will launch this Saturday at the L&A Museum and Archives.

In the days when people were illiterate or had little access to books, local history was kept alive orally through songs and poetry. Stories of train wrecks, unusual events and gruesome murders are remembered today because those stories were passed on through folk songs.

In Napanee, that tradition is being kept alive by songwriter Stephen Bruce Medd, who is writing songs about local historical events and setting existing poems about such events to music.

Medd said he wanted to perform and record folk songs about local history, but when he found there were almost none, he started writing his own, and he has collected them in a book called If Lilacs Could Sing. The book, which also contains historical photos and stories about the songs, will be launched officially at this Saturday at 2 p.m., at the Lennox and Addington County Museum and Archives, and will include a performance of the songs by Medd and Kingston musicians Jon McLurg and Landon Martin.

Medd explained that the title refers to the lilacs planted across southern Ontario by settlers who brought them from Europe. Even today, the sight of hardy lilacs growing wild marks the site of a former homestead or farm, since lilacs are not native to Canada.

“If lilacs could sing, they’d have quite a story to tell,” he said.

He added that lilacs have other meanings. To many, they are a sure sign of spring, but they represent more.

“The lilac, for me, also marks how the lands were transformed by the early settlers,” he said.

When Medd went looking for ballads about local history, he only found one: The Murder of Maggie Howie, a song about a young kitchen maid killed with an axe by her former lover, Michael Lee, in Napanee in 1882. During his two years of research, Medd also found two poems, which he set to music, and he wrote the rest of the ballads based on the history he uncovered during his song search. They feature everything from the Royal Flying Corps, the Oneida village of  Ganneious, the ghost of steamship captain and even an ode to Gibbard Furniture — possibly the first folk song ever written about a furniture factory.

Writing historical ballads is a bit of an art form, Medd said.

“You want your song to be factually correct, but you don’t want it to sound like a textbook,” he explained.

He said the history of the area from Quinte to Kingston is important. If Lilacs Could Sing is just the first of a trilogy of books he will be releasing. The other two will cover the history of Kingston and the Quinte area.

“This is one of the core spots of the birth of Canada,” he said. “It’s all very fascinating. We tend to forget our past. There’s always this push towards progress, but we have to retain our past.”