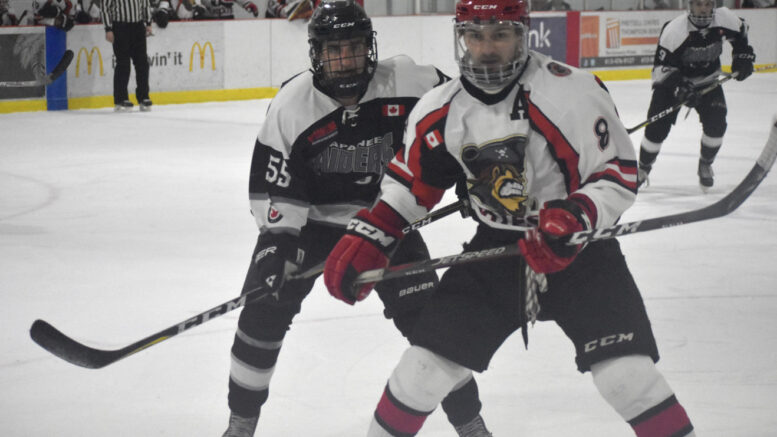 Few teams can boast they’ve beaten the Napanee Raiders this season-and only the Picton Pirates can say they’ve done it twice.

Picton held a 2-0 lead after the opening 20 minutes on the strength of goals from Landon McLellan and Griffen Conger.

Napanee rallied in the second with two unanswered from Justynn Steven and Austin Labelle at 5:06 and 15:31 respectively. Brian Bygrave scored late in the second to restore Picton’s lead, one they’d never relinquish.

Nick Kyte and Cole Lavender each potted a goal less than a minute apart in the opening five minutes of the third to put Picton up 5-2. Greg Powles struck back for Napanee just 24 seconds later to cut the deficit to 5-3 but that was as close as Napanee would get. Khaden Henry iced an empty net goal with just under two and a half minutes left in the game.

Half of Picton’s six goals came on the power-play while Napanee was 2-6 on their man-advantage.

Bailey Maracle took the loss, giving up all six goals on 38 shots. Eric Tessier earned the win with 32 saves.

Thursday’s game marked the first time Napanee had allowed six goals all season and only the second time they’d given up five or more.

After a scheduled road game in Campbellford on Saturday was postponed due to weather, the Raiders capped their weekend with a 3-2 win in Gananoque over the Islanders.

Noah Westwater and Marshall McFarland each scored in the first for Napanee, giving them a 2-0 lead into the first intermission.

Kyle Cassford got Gananoque on the board at the 7:12 mark of the second before Liam Mroueh scored what would prove to be the game winner for Napanee at 9:55.

Nick Maillet had a goal in the third to cut the lead to 3-2 and make it interesting, but the Raiders were able to hold on for the win.

Mitch Bown made 31 saves for the win while former Raider Jeremy Piazzi turned away 33 shots in the loss.

Napanee is back home for the first time since Dec. 20 on Friday, when they host the North Kawartha Knights.

On Saturday they visit Lakefield for a makeup date of their Dec. 14 game that was cancelled due to weather.

They close out a busy weekend with a rare Sunday home game, taking on the Rebels for a 6:30 p.m. puck drop.