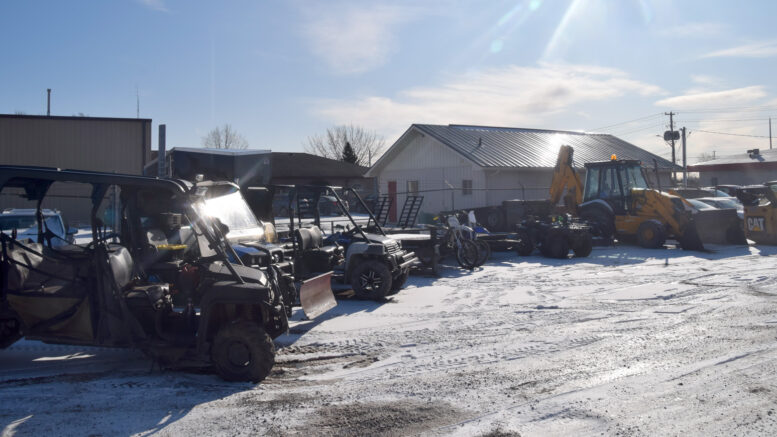 ATVs, heavy construction equipment and dirt bikes were among the over $600,000 worth of equipment recovered by L&A OPP. Photo by Adam Prudhomme.

Over $600,000 worth of stolen construction equipment was recovered in Newburgh on Jan. 2 in what is considered one of the biggest recoveries of stolen property in the history of the Lennox and Addington OPP detachment.

A 32-year-old Kingston man was charged with six counts of stolen property over $5,0000 and one count of possession of property obtained by crime after a pair of backhoes, a skid steer loader, several ATVs, dirt bikes and a trailer full of tools were recovered by police.

The OPP Community Street Crime Unit initiated an investigation and executed a search warrant on a commercial property on County Rd 4 in Camden East.

L&A OPP Insp. Scott Semple said the search warrant was part of an ongoing investigation, dating back to October.

“We take these things seriously and will do everything we can to recover stolen property but we plead with people, especially small business owners that have side by sides and ATVs and any type of equipment that is easily stolen, to make sure that it’s locked up,” said Semple. “High end stuff like backhoes, invest some money in things like GPS technology to put in them so they can be located.”

Semple said one of the companies were just a few days from having to pay a $30,000 deductible on a piece of stolen equipment before police were able to locate it in this bust.

“That could be the difference between them staying open or being profitable,” said Semple. “It’s important for us to do this work, but we plead with people with any equipment to lock it up.”

Several of the machines had been tampered with in an attempt to make them unrecognizable.

“This is a bit unique in that there were attempts to disguise the true identity of the equipment and keep it local,” said Semple, noting that most times thefts like this involves moving the stolen property to a much further location before attempting to sell it. “There’s been attempts to change the make and model of the equipment, the colour of it to make it look like it’s legitimately owned.”

Semple warns shoppers too, particularly for heavy machines, to make sure all vehicles have the proper paperwork when buying second hand.

“If there’s no paperwork for it, definitely get a hold of us and ensure that it isn’t stolen,” said Semple.

The investigation is ongoing and further charges and arrests could be forthcoming.