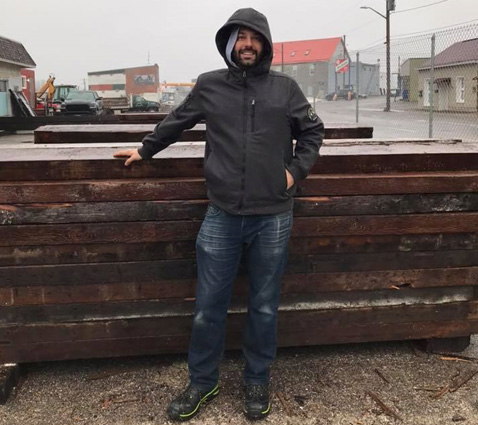 Niko Kougias of Deadstok Reclaimed, stands next to some of the wooden beams that was taken from the former Gibbard Furniture building that he will use to make new items. Photo by Lisa Koenig.

What is old will once again be new in the up and coming Gibbard District, a community hub/residential area to be completed in 2020.

Doornekamp Construction has enlisted the services of Deadstok Reclaimed, a business that reclaims wood to be used in new construction.

The Gibbard District will be a reincarnation of the lauded Canadian furniture factory by the same name. Having opened in 1835, the factory had been a mainstay in downtown Napanee until its closure back in 2009.

Doornekamp contacted Niko Kougias, owner of Deadstok, when they saw him on the History Channel’s Salvage Kings.

“We’re just in the preliminary phase of bringing some of that wood back into the development in the form of countertops, islands, and maybe even benches that could be used outdoors or in the lobby,” explained Kougias.

Like many things in our consumer culture, furniture and other wood products invariably end up in landfills.

“I really like the fact that this stuff is not going into the landfill anymore. When I started this business almost a decade ago, we were noticing so many bins filled with all this wood and I thought it might be an opportunity to turn that wood into something people would like to have in their homes for a lifetime,” said Kougias.

Kougias believes the market for reclaimed materials is only growing.

“Since I was a kid, people have been pushing the three Rs-reduce, reuse, recycle-as being major values to utilize as good human beings. So, I think more than ever there’s a vast market of people that want to buy salvaged and recycled materials,” he stated. “It’s such a unique story because we’re creating furniture out of wood that once held up a furniture factory, so I think it’s extremely close to what we do for a living.”

Furthermore, stated Kougias, the Gibbard District will provide jobs in the community, much the same as the factory did back when it was in operation.