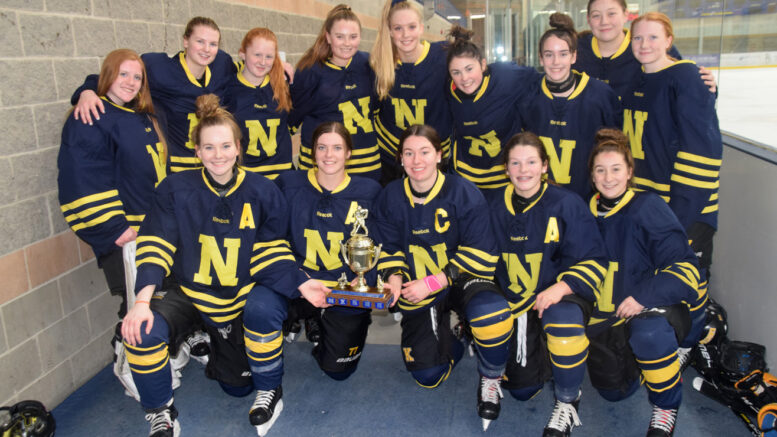 Hawks captain Maddi Wheeler skates in alone to score the game winner in the finals. Photo by Adam Prudhomme.

Hawks captain Maddi Wheeler skated in alone and deked the Falcons’ goalie to tuck the puck across the goal line with just over two minutes left in the third. Rachel Foster drew the assist on the play. Hawks goalie Makenna Marlow tracks the puck and gets set to make a blocker save. Photo by Adam Prudhomme.

Marlow made the goal stand with some key saves late in the game, including a glove save with just 7.5 seconds left on the clock.

Napanee had out-chanced Frontenac for much of the game but didn’t have anything to show for it on the scoreboard. “The big thing is you can’t force it,” Hawks coach Chad Miller said of the girls sticking to the game plan despite being held off the scoreboard. “If you force it and make an error, you give a team that you have been outplaying the opportunity to win the game. We did that (in a previous league game against Frontenac), we gave up a goal because (the Hawks) pushed the envelope too much. Today they stuck with it, got the one they needed and closed the door at the end. They stuck defensively, they didn’t have a lot of quality chances.”

The game was a tightly contested, chippy affair. NDSS’ Megan Morrow skates in close for a shot on net. Photo by Adam Prudhomme.

“The kids know each other from outside of hockey,” said Hawks coach Matt Campeau. “That’s a good thing and a bad thing. There’s some friendships, there’s also some rivalries that tend to surface in big games.”

Napanee was a perfect 4-0 in the tournament. In the semifinals they held off St. Mary’s 3-2. In pool play they opened the tournament with a 3-0 win over the Holy Cross Crusaders. Breanna Roy, Jaidyn Manion and Lila Pringle each had a goal. In their second game they shutout La Salle to advance to the semifinals. Marlow earned all four of Napanee’s win.

“Makenna’s been really solid ever since she joined the team last year,” said Campeau. “She’s a very consistent goalie.”

Wednesday’s win marked the second straight year Napanee has won the tournament and fourth time in the last five years.

Napanee is 1-1 in league play thus far in the KASSAA season. They’ll take on KCVI on Monday in their final game before the Christmas break.