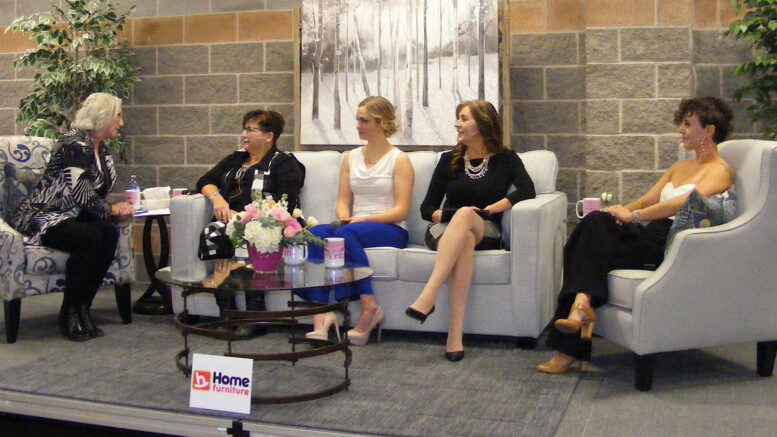 Help each other to succeed and be supportive of one another — that was the main take-away from the first part of the Women With Momentum speakers panel held Thursday at the Strathcona Paper Centre in Napanee.

The joint project of the Downtown Greater Napanee BIA and the Napanee & District Chamber of Commerce was created to encourage and empower local women in business. The second part will be an Awards Gala at the same location on March 5.

Megan Sands said she was thrilled with the turnout for the event, which included vendors’ marketplace and dinner.

“I’m super stoked,” she said. “I am so thankful for everyone who purchased a ticket.”

Each panellist had a story about her own path to success. For Hodgen, who started her journey in fitness competitions, the “aha” moment was when she asked herself why she had to be told by someone else that she was good enough, and that she needed to trust her belief that she was.

“I would not be who I am today if I’d listened to the opinions of other people,” she said.

All agreed that balancing a career with home life and leisure time is difficult, but that balance is essential, both for success and to avoid burnout. Sometimes, they said, it means leaving a career and choosing to do something else. Hodgen said she was juggling several jobs while running her business, and the stress began to show.

“I did that for nine months,” she said. But she finally reached a point where she realized, “I can’t do this anymore. I need to focus on my family.”

Koenig also was in a high-stress occupation in broadcasting but she left that field and trained as a reflexologist. She pointed out that you can always find new paths, just as she did, both for your own peace of mind and for that of your family.

French agreed that changes in your life can force you to adjust your priorities, hard as that may be, because your own commitments also have an impact on your family.

Larkin had a similar story. She was a journalist in Japan, working 13-hour days, six days a week. When it started taking a toll on her health, she quit and returned home.

“You can get in too deep, and need to realize you can’t do it all,” she said. Her solution was to set daily, weekly, monthly, yearly, even five-year goals, which broke things down into manageable parts. She retrained as a therapist, and now is qualified as a registered massage therapist, master myoskeletal therapist and cranial sacral therapist. She also is a qualified personal trainer and yoga instructor. While it sounds like many different things, in actuality they all work together to enable her to help people heal from pain.

All agreed that setting aside “me” time is crucial. Morris said she makes sure she has an hour set aside every single morning for reading. Hodgen sets aside time for working out.

French agreed, adding that with only 24 hours in a day, the only way to get that leisure time is to plan for it and never feel guilty about setting time aside for yourself.

“We have to start being kinder to ourselves,” said Morris. “We would never say to someone else what we say to ourselves.”

The March event will feature guest speaker Lori MacDonald, who has been in the public service for 36 years and who has a degree in criminal justice as well as serving as Associate Deputy Minister of Immigration, Refugees and Citizenship with the federal government. She was at Thursday’s event and spoke about the topics discussed.

“As women in this community, we must support each other,” MacDonald said. “We must always look for ways to help others reach their success.”

For more information about the March gala, contact the BIA or Chamber of Commerce.