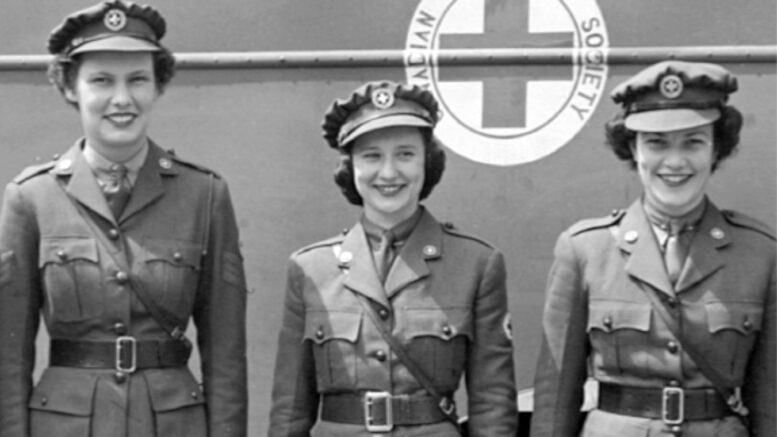 A still image from an upcoming documentary that focuses on Canadian women who contributed to the war effort. The film, which will be broken down into a four part series, draws heavily from research conducted by Napanee author Sherry Pringle’s 2015 book, Extraordinary Women, Extraordinary Times. Submitted photo.

Local film producer Dale Morrisey has teamed with local author Sherry Pringle to bring firsthand accounts of women who served in WWII to the small screen.

Inspired by Pringle’s best-selling book Extraordinary Women, Extraordinary Times, Morrisey of Wandering Journalist Productions set out to interview the women in the stories, their family members as well as historians for added context. Currently under the working title Forget Me Nots: Canadian Women in World War Two, the documentary is a series of four episodes that will be made available through digital platforms, video on demand and DVD. Talks are also underway to find a broadcast home in Canada, the US and possibly even the UK, as well as to have it available for schools to show in classrooms.

“It’s a passion project,” said Morrisey, whose writing/director credits include Hockey’s Lost Boy and The Father of Hockey. “We’ve been working on it for a while. We’ve been doing it basically on our own with no funding.”

After first discussing the idea with Pringle and going through her notes, Morrisey decided there was too much information to condense it all into one film. He ultimately decided on four episodes: The Secret War, which talks of SOE Agents, Camp X and code breakers, In The Service, which focuses on WRENS, air traffic and weapons controllers, Horror of War, which looks at the Holocaust, war camps and Polish Resistance Fighters and episode four, The War At Home, which examines the women’s baseball league, Napanee’s Gibbard’s factory girls who contributed to the war efforts and a section on war brides.

“You could do an entire documentary film just on Gibbard’s and the Gibbard’s girls,” said Morrisey.

Getting their stories on film was important to Morrisey, who notes it ensures these firsthand accounts will be available for generations to come.

“We’re basing this in large part on the book Sherry wrote and we were wanting to revisit the women that were in the book,” said Morrisey. “Sadly, some of the women that we wanted to interview has passed before we could get to them. Sadly, as well, some of the women have passed since we interviewed them. That brings it back into focus that it’s so important to get these stories on film and have an archive of sorts so that people can see and hear these stories. It’s one thing to have an audio. It’s one thing to have it in a book. But to be able to put a face to the voice and see these women, it just helps the viewers reflect back on what they did in the second World War, I think it helps put things into a very sharp focus.”

Pringle, who released her book in 2015, wanted to focus on an aspect of WWII that often gets overlooked in textbooks.

“(Most books focus on) the technical aspects of war,” said Pringle. “Who invaded whom and what kind of weapons they used, what kind of tanks they had. The planes they flew and all of that technical stuff. It overshadowed the individual contribution made by the men and obviously the women. The women certainly weren’t looking for any accolades. They didn’t seek them. Some of them didn’t even want the medals that were bestowed on them at war’s end. They just felt they wanted to do something to contribute.”

Even she admits to learning new things while researching her book.

That just further cemented to her the need to record these stories in a permanent form. Much of her research has been sent to war museums as well, making them available for anyone who wants to take it further.

The four-part documentary is just another step in making sure these stories don’t get lost when the women are no longer here to share them.

A few finishing touches are still to be made on the series, which will be distributed by Factory Film Studio. A final release date is yet to be determined.