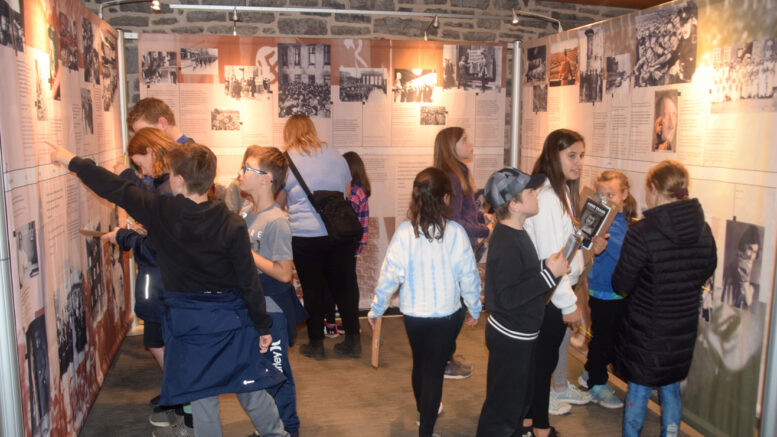 Students from Amherstview’s Our Lady of Mount Carmel Catholic School had the opportunity to hear from a holocaust survivor last Wednesday during a visit to the Lennox and Addington County Museum and Archives.

The Grade 5/6 students were at the museum to tour the Anne Frank-A History for Today exhibit. Their tour was fortunate to fall on a Wednesday, when holocaust survivor Jochebed Katan was on hand to offer stories from inside Nazi occupied Holland.

Born to Jewish parents not far from the Frank family secret annex, Katan was quickly given to another family who was tasked with keeping her hidden from Adolph Hitler’s army.

“My mother had to give me away for their safety and my safety,” recalls Katan. “I went into hiding with another Dutch family. I’m grateful for that. I feel still they are my family. My parents went into hiding in a totally different area in Holland. My mother was caught and sent to Westerbork camp. She saw at the end the last train that went to the concentration camp. She saw the last train departing. On the train was Anne Frank.”

Fortunately for her mother, train drivers refused to operate the trains after that run because they knew the horrific fate that awaited the passengers. Her father managed to stay safely hidden throughout the war. After the Allies’ victory, her parents were able to locate her through the help of the Red Cross.

A Canadian resident for the past 30 years, the 77-year-old considers herself fortunate to have survived-104,000 Jewish people were murdered in Holland, part of six million murdered overall.

“It’s very important that youths know how this evolved and that it is in repeat at the moment, I’m not shy to say that,” said Katan. “I ask always their help, not to exclude religion or another group that has red hair or dark skin or has another religion like Islam or is Jewish. Because that’s where it starts.”

Now living in Kingston, Katan has travelled across the U.S. and Canada sharing her story, which she put together in a book titled ‘You’re Not Allowed To Shoot Me’, which is available at the Lennox and Addington County Museum and Archives.

Norah House was one of the students on hand to tour the exhibit.

“(The most shocking thing to learn was) that there is bad people like the Nazi in the world that kill people,” she said.

Prior to arriving to the museum her class studied the diary of Anne Frank to learn a bit of the background.

“It was really inspiring that she survived something that she never thought she could do,” House said of hearing Katan speak.

“It was such a horrible time,” added Campbell Barrie, another student on the tour. “It was great that (Katan) survived it because a lot of people didn’t.”

“They had to live in an annex, a little room with eight people for two years,” said Barrie. “That’s just so hard. They couldn’t make any noise throughout the day. They had to be silent and live there for two years.”

Reading the laws that were enforced by the Nazis was difficult for her as she tried to put herself in their situation.

“It’s so unfair because they did nothing wrong,” said Barrie. “Then all these rules are just one day put on them and they couldn’t do anything about it.”

The Amherstview school’s visit is part of 37 visits that are planned to the exhibit, with an estimated 1,300 students expected to visit the museum over its five week run.

The museum is located at 97 Thomas Street E in Napanee.