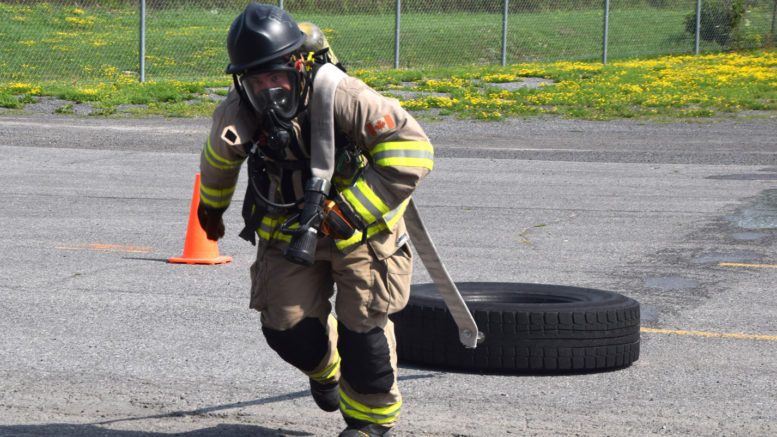 Greater Napanee Emergency Services firefighters were among those from over 15 countries to take part in the 3M Scott Firefighter Combat Challenge World Competition, held in Montgomery, Alabama Oct. 21-26.

Napanee’s Kevin Duncan, Dan Chalk, Robert Howe and Joe Thompson competed against some of the fastest firefighters in the world, reaching new personal bests in their individual runs, tandems and team relay.

Howe achieved a personal best of 1 minute 57 seconds in the Over 40 category, which placed him as a member of the coveted Lion’s Den, a group of outstanding athletes that strive to place themselves at the top of the sport.

“All of the days and nights training and working out resulted in hitting my goal for the year,” said Howe. “I could not have done it without my teammates.”

The four teammates also competed in a team relay where they each take on one to two of the seven tasks that make up the Fire Combat course. They finished with team personal best of 1:25 and advanced to the final day of competition.

Duncan and Howe moved onto the final day of relays with their Over 40 tandem relay, splitting up the course tasks and finishing ninth overall with a time of 1:46.

The 3M Scott Firefighter Combat Challenge is a seven stage obstacle mimicking tasks performed on the fire grounds. Competitors dressed in full turnout gear race against the clock while on air and go up six flights of stairs carrying a 40 pound hose pack. Once at the top they pull up a 45 pound donut roll to the top of the tower and then proceed back down the stairs, hitting each one as they go. Next is the force machine where the use 300 pounds of force to move the beam a distance of five feet. Once completed, they run a distance of 140 feet around hydrants and then pick up a fully charged hose and drag it 75 feet.

The competitor opens the nozzle, hits the designated target with the stream of water, shuts the nozzle and places it on the ground. The final stage is the victim rescue where they drag backwards a 175 pound Rescue Randy mannequin a distance of 106 feet.