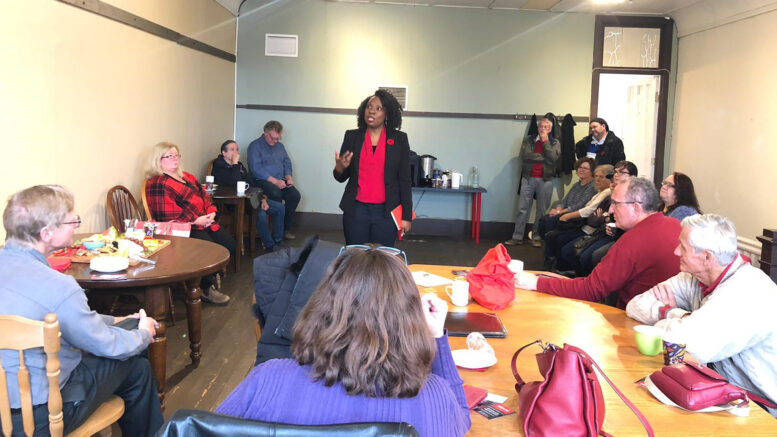 Ontario Liberal leadership hopeful Mitzie Hunter was in Napanee on Saturday, speaking to party supporters at a meet and greet at Ellena’s Cafe.

The MPP for Scarborough-Guildwood is one of five names currently in the running to take over leadership of the provincial party following the resignation of Kathleen Wynne after the 2018 provincial election. The next leader will be announced at a convention on March 7, 2020.

“It was a very lively discussions to look at the future of our province and what we as Liberals need to do to prepare for the next election,” Hunter said of her stop in Napanee. “A lot of the topic centred around education and investments we need to make in education. We also talked about climate change and the importance of having a climate change policy to really address the needs of rural communities. Flooding was a concern, the rising levels of Lake Ontario and on a weekend where there was a wind storm, with lots of power outages, it was top of mind for a lot of people.”

Whoever wins the Liberal leadership will have a tough task ahead of them as the party saw their seat total drop from 55 to seven following the last election.

“I think people are really disappointed with (Premier Doug Ford’s) performance and his policies, particularly around things like education,” said Hunter. “We talked about how online learning and having four courses in high school online really disadvantages rural students who may not have the high speed internet at home and the need to invest in broadband before a policy like that unfolds.”

“People will be looking to the Ontario Liberal party to have a new face, new ideas and strong leadership,” said Hunter. “I believe I have that background having served as cabinet minister in key portfolios like education and Associate Minister of Finance, responsible for pension reform and minister responsible for universities, colleges and training. I have that forward looking to how we make our province ready for the future, making sure we invest in education, we invest in post-secondary education, universities and colleges and that we have a strong program to create jobs in the province.”

Hunter says many of the cuts under the current government have been unnecessary.

“Premier Ford really inflated and manufactured a deficit of $15 billion to justify cutting programs and services to education and health care,” said Hunter. “And things like public health and child care have been cut. That deficit was not there, it wasn’t real…A third party review of the province’s books have confirmed the deficit is nowhere near $15 billion, it’s actually half that amount at $7.4 billion. Even in that $7.4 billion, there’s some of the policies that Doug Ford himself has created to inflate the deficit. Telling Ontarians that we have to cut services, that we need to do it because we have a $15 billion deficit is not the case. It’s disappointing because it’s resulted in a lot of program cuts.”

More information on Hunter can be found at www.MitzieHunter.ca. Members of the Liberal party looking to have a vote in the upcoming leadership convention must be registered with the party by Dec. 2.

The next provincial election is scheduled for 2022.