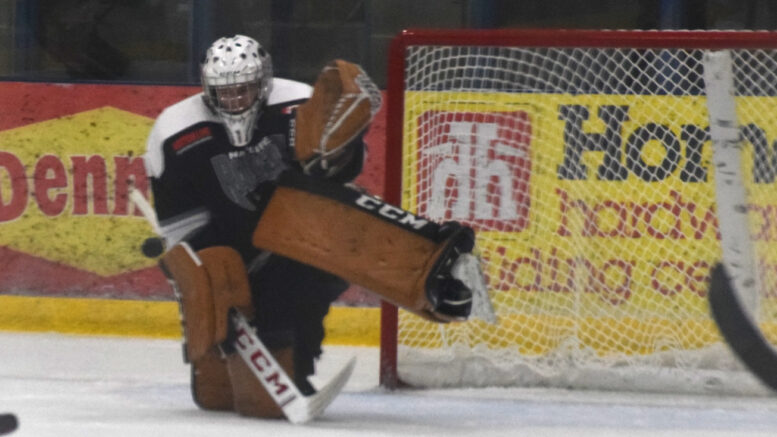 Bailey Maracle was perfect in Game 2 to give the Raiders a 2-0 series lead in the Tod Division semifinals. File photo.

A home-and-away sweep of the Picton Pirates has the Napanee Raiders rolling to start the month of November.

After hanging on for tense 4-3 victory in Napanee on Friday, the Raiders made themselves right at home on Saturday, cruising to a 7-0 victory in Picton.

Bailey Matthews scored the eventual game winner on Friday, notching a goal at the midway point of the third period to put the Raiders ahead 4-3.

Picton goalie Brennan Bush kept his team in the game, stopping 45 shots on the night while his teammates mustered just 17 shots total. Napanee matched Picton’s total shot output in the first period alone, and again in the second while firing 15 in the final 20 minutes.

Nick Kyte put the Pirates ahead in the first at 8:25 into the game. Evan Foley and Jacob Gilbert each scored within a two minute span to give the Raiders the lead, only to be offset by Khaden Henry.

Neither side found the back of the net in the middle period and the two teams entered the final intermission tied 2-2.

After holding their own against the Tod Division’s top team a night before the young Pirates were no match despite holding home-ice advantage the next night, falling 7-0. Mitch Bown collected the shutout, turning away 16 shots.

King scored just 2:37 into the game in what would prove to be the game winner. Marshall McFarland, Nic Case, Aiden McFarland, Foley, Mackenzie Warren and Brodie Maracle each tallied for the Raiders.

Prior to Sunday’s league game, the Raiders and Pirates held an exhibition alumni game, made up of players from each team’s 30 year history.

Napanee’s next league game is Friday when they welcome the Campbellford Rebels to the Napanee. Puck drop is 7:30 p.m.

On Sunday they travel to Clarington for an Orr Division matchup with the Eagles. Puck drop is 1:20 p.m.