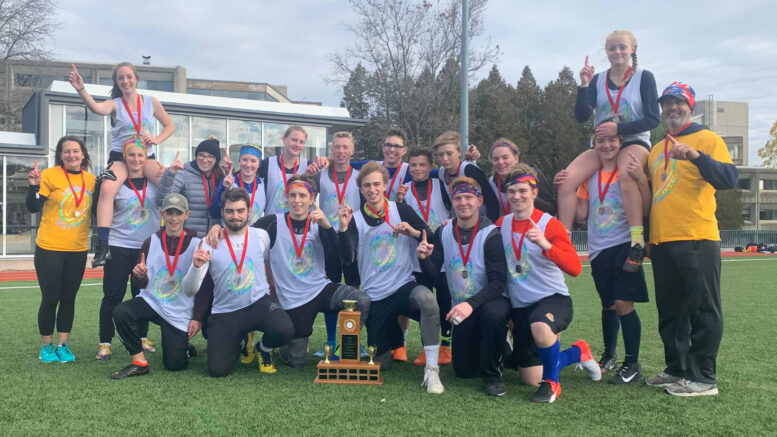 NDSS’ ultimate frisbee team ran the table at EOSSAA on Wednesday in Kingston, winning all five games while allowing just five points against to capture the gold medal and advance to OFSSAA.

There was no rain this time, but the Hawks were able to utilize the high winds in their favour to rack up the scoring, beating out eight of the top high school teams from across Eastern Ontario. Leadership was stellar by Logan and Ben White, Lyric Barkey, captain Matt Ruttan, Marshall McFarland, Braden Bannon and Zaria Jackson. Just as he was at OFSSAA, Dean Taylor was a powerhouse for the Hawks.  High five disc in the air goes to Mack Grosvenor, Kylie Mosgrove, Samantha Smith, Missy Reynolds, Travis Angel, Wyatt Johnston, Alice McCutcheon, Isaac Isbester and Jake Vanberke.

For the EOSSAA gold against KCVI in a universal point, Reynolds caught a 3/4 field huck, passed it to Taylor, who then swung it to Bannon to send McFarland to literary lay it all out to catch the end zone final point.

On Thursday and Friday the Hawks will play for the inaugural ultimate frisbee OFSAA championship in Oakville.

Anyone interested in donating to help the athletes with the cost of going to OFSAA, see Donna Benn in the office at NDSS.