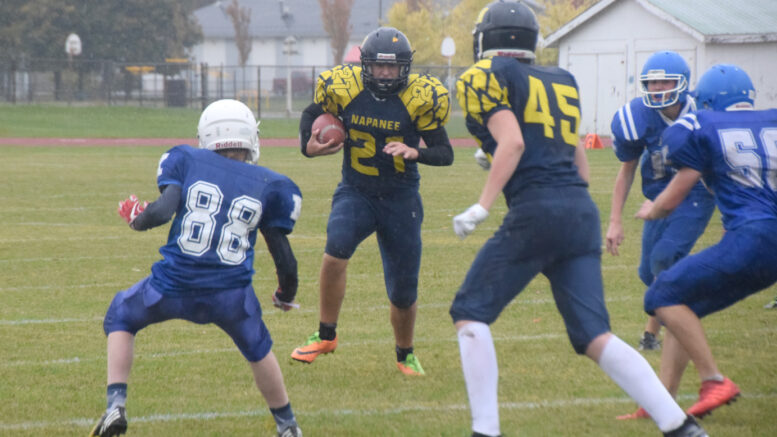 Drayden Haller carries the ball for NDSS and looks to avoid a Blues defender during Wednesday's KASSAA league game. Photo by Adam Prudhomme.

Battling a tough opponent in sloppy weather conditions, the NDSS Golden Hawks junior boys football team came up short in a 28-6 defeat at home to the KCVI Blues on Wednesday.

Still looking for their first win of the season, the Hawks matched up against a third ranked Blues team that had lost just once in three games played. KCVI’s defense proved to be too much for NDSS, coming up with a huge stop on their 25 yard line to close out the first half. Persistent rain fell throughout the entire game, forcing the teams to rely on their ground game as much as possible.

Doug Waldie scored the lone touchdown for the Hawks, who dropped to 0-4 on the KASSAA season.

Napanee will have two more chances to pick up a win this season, starting with a home date against the Regi Panthers on Wednesday.

They’ll wrap up the regular season on the road against Bayridge on Halloween.

NDSS’ field hockey season came to an end following a 1-0 loss in the KASSAA quarter-finals against Frontenac. NDSS was 5-3 on the season which gave them the fourth seed heading into the playoffs.

NDSS’ junior boys volleyball team was swept in three sets to the first place Blues. NDSS is 5-3 on the season, which has them fourth on the season. They’ll wrap up the regular season on Thursday against Sydenham.

The senior boys volleyball team fared just a bit better, winning one set before falling 3-1 to the Blues. NDSS’ senior team is also 5-3 on the year.