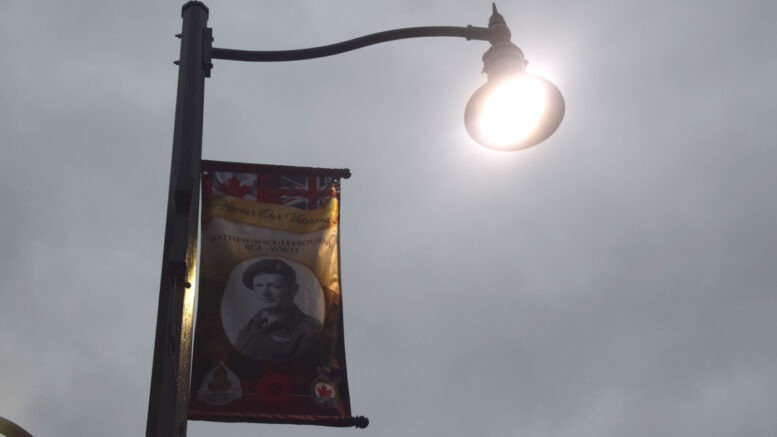 It’s been a year in the making for the Downtown Napanee Business Improvement Area (BIA) and the Royal Canadian Legion (RCL) Branch 137, but with the help of a municipal grant banners honouring local war veterans are finally hung on downtown light posts.

Members from the Legion and the BIA gathered in front of the Bank of Montreal on Tuesday to witness their idea be displayed for the town to see. Each banner has a different veteran on each side and, with Nov. 11’s Remembrance Day approaching, this week was the perfect time to put them on display. 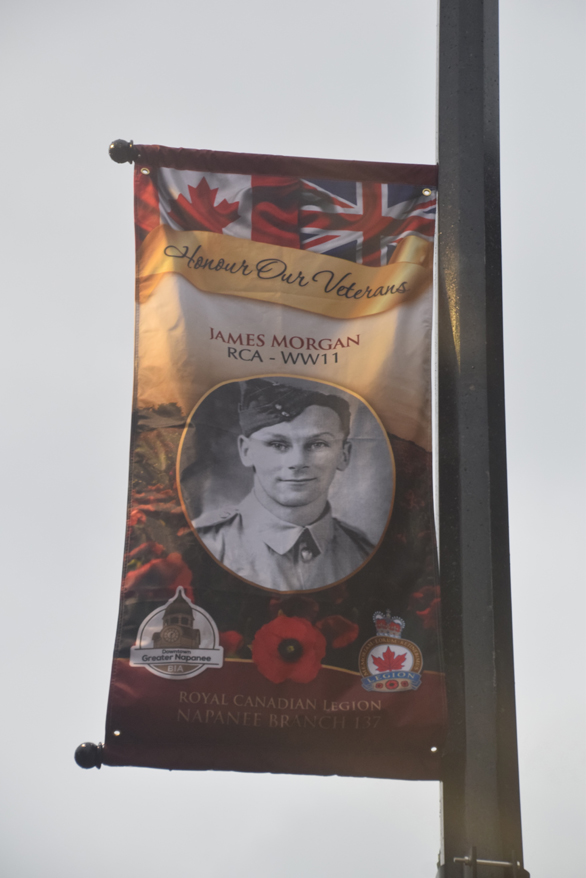 “One year ago I had the opportunity to go to Lyndsay (Tee, Greater Napanee’s economic coordinator) and they have banners like these up in their town,” expressed Tiffany Lloyd, Executive Director at the BIA. “So when I came home I started the conversation with the Legion that this is something we should be doing.” The banners being too costly for the BIA and the RCL to fund out of their own pockets, together they applied for a municipal grant, which they received in the spring and immediately started the ball rolling. “We got Sean Beak to design all of the banners and the Legion gave him the photos and names and he designed them,” Lloyd stated. “He also had to re-master the photos because they were copies of very small photos, from some cases WWI, and to blow those up to the size they are now would make them so grainy. So he spent a lot of hours re-mastering these photos so we can see all of these veterans.” 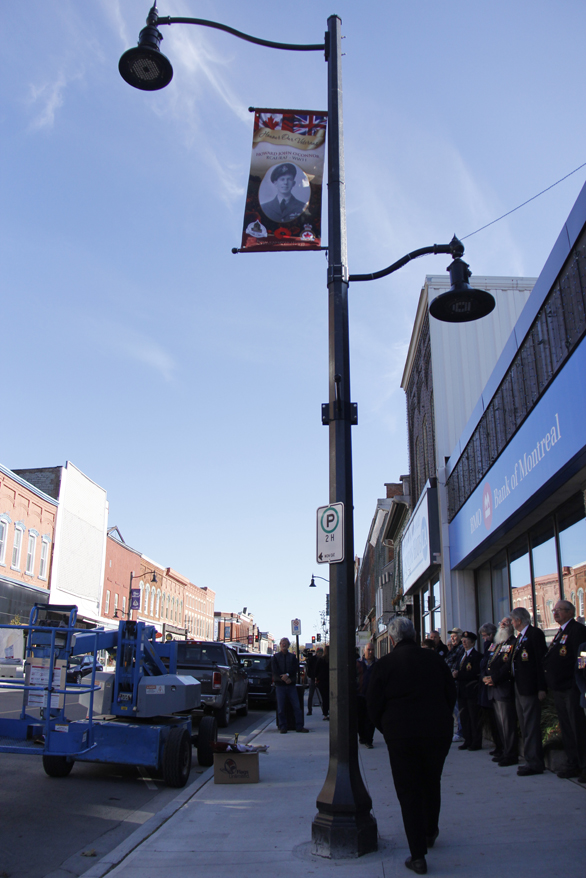 Members of Napanee Legion Branch 137 look on as a banner honouring WWII veteran Howard O’Connor is hung on a downtown light post. Photo by Desiree DeCoste.

Tim Smith, the bar chair for the Legion, Branch 137 was present for the event and helped pick out which banner was hung first, Howard John O’Connor. “Howard was a Napanee boy and was a pilot during WWII, he flew Lancaster’s and Halifax bombers and I think he flew over 30 missions,” Smith said. “He came back to Napanee and became the postmaster here, was a life member of our Legion, past president and a member for over 60 years. He became a civilian pilot and had his own airplane, which he flew up until he was 90. Unfortunately he passed away, I think six years ago at the ripe age of 93.” Smith also added how these banners are a fine way for the town to remember with the upcoming Remembrance Day and how much they really appreciate this.

“It’s really exciting,” added Lloyd. “It’s been a long year coming and with all of the partners involved I’m so very grateful for them.” The BIA helps and allows local business people and commercial property owners and tenants to partner together, and with the support of the municipality, to organize, finance and carry out physical improvements and promote economic development.