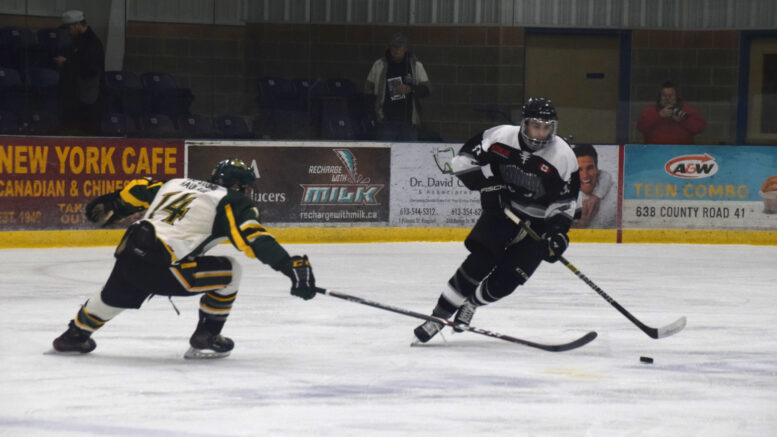 Napanee's Brodie Maracle (right) scored his sixth goal on Sunday against Port Perry, giving him 20 points on the season. Photo by Adam Prudhomme.

Double-digit goal output led to a double-digit win streak for the Napanee Raiders, who downed the Mojacks 10-1 in Port Perry on Sunday to improve to 10-0 on the season.

Much of the heavy lifting was done early as the visitors banked six goals in the opening 20 minutes. Justynn Steven ignited the scoring at the 4:22 mark, his first of two in the period. Liam Mroueh netted the game’s lone power-play at 6:10.

The 2-0 advantage remained the same until Napanee picked up four goals in the final four minutes ahead of the first ice flood. Devon King scored at 16:08 and 19:36, sandwiched around goals from Evan Foley at 18:01 and Steven at 18:26.

Napanee continued to pile on in the second when Brodie Maracle made it 7-0 just shy of eight minutes in. Bailey Matthews and Jacob Gilbert each added a goal in the final seconds. Soren Zamuner rounded out Napanee’s scoring with their 10th at 7:07.

Josh Lemmon gave the hometown crowd their lone reason to cheer with a garbage time goal in the final two minutes, which did little but spoil Bailey Maracle’s bid for his second shutout of the season. Instead he finished with a still impressive 23 saves, improving to 6-0 and lowering his goals against to 1.83.
Nicholas Dicks started the game for the Mojacks but failed to make it out of the first period, allowing four goals on 18 shots, giving way at the 18:01 mark. Corey Kuypers saw 37 shots the rest of the way, allowing six to hit the twine.

Both teams played discipline, with Napanee only drawing two power-plays while Port Perry had one.

Napanee opened their Thanksgiving long weekend with an 8-2 drubbing of the visiting Lakefield Chiefs on Friday.

Both teams managed just a goal in the opening period, with Steven striking just 39 seconds after the opening draw, followed by Lakefield’s John Post less than two minutes later.

Napanee pulled away in the second with five unanswered. Steven again got it started, putting the Raiders ahead for good 34 seconds into the frame. Matthew Panetta, Aidan McFarland and Noah Westwater each added a goal, all within the first five minutes. Evan Foley added Napanee’s sixth of the game at the 13:43 mark.

Steven completed the hat trick a little after the midway point of the third. Foley added his second of the game late in the period. Cole Robbins broke Napanee’s string of seven unanswered with a late goal, but it wasn’t nearly enough.

Mitch Bown picked up the win, turning away 25 pucks. Trevor Lawrence started for Lakefield, giving way after allowing the fifth goal on 22 shots. Brandon Soucy took over from there, allowing three goals on 18 shots faced.

Napanee will look to reach the quarter mark of their 44 game schedule unbeaten this Friday when they welcome the Amherstview Jets to the SPC. Pucl drop is 7:30 p.m. On Sunday they welcome the Campbellford for their first look at the Tod Division’s cellar dwelling Rebels. Puck drop is 6:30 p.m. at the SPC. Friday’s game marks the start of an extended home stand for Napanee, as they will play their next five within the friendly confines of the SPC, not returning to the road until Nov. 2 when they travel to Picton.

Despite their torrid start to the season, the Raiders find themselves in a bit of a race for the Tod Division’s top spot near the quarter mark of the season, with still plenty of games left to play. Their 20 points has them four up on the Gananoque Islanders, who at 7-0-0-2 are yet to lose in regulation. Amherstview is third at 5-4 (10 points), Picton fourth at 4-5 (eight) followed by Port Hope 3-4-0-1 (seven) and Campbellford 0-8-0-1 (one).