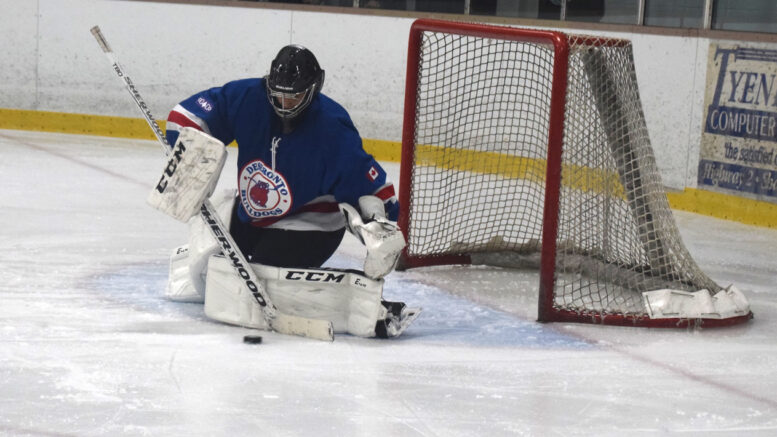 Kira Hurley was once again strong in relief, stopping all 12 shots she saw in Friday's loss in West Carleton. Photo by Adam Prudhomme.

The Deseronto Bulldogs are back to even following a 7-4 win over the Maxville Millionaires at home Saturday, moving to 2-2 in their inaugural EOSHL season.

Chris Rogalsky, Mitch Merry and Cullen Hinds each scored for the Bulldogs in the opening frame, offset by one from Maxville’s Stevie Ray Adams.

The teams traded a flurry of goals in the second, with Calvin Wojtaszak and Rogalsky each scoring once for the Bulldogs while Hinds picked up a pair to notch the hat trick. Connor McLeod and Chris Newhook responded for Maxville to put the score at 7-3 heading into the third.

Ray Adams had the lone goal of the third, but it wasn’t enough to prevent Deseronto from recording their second win. Graeme Gemmill was busy in net, stopping 51 of 55 for the win.

Saturday’s victory snapped a two-game losing streak for Deseronto, who lost 8-3 Friday in their first road game of the season against the West Carleton Rivermen, who had topped the Bulldogs one week prior in Deseronto.

Brandon Torres, Merry and Craig Cross scored for Deseronto, who were down 5-0 before they were able to respond.

Hayden Ford made his debut in net for Deseronto, allowing eight goals on 29 shots. He was replaced by Kira Hurley in the third, who turned away all 12 shots she saw.

Deseronto is on the road this Saturday, when they travel to Cornwall to face the Prowlers. Deseronto won their lone meeting thus far, a thrilling 7-6 overtime win on Opening Night. The Bulldogs won’t return home until Nov. 9, when they’ll welcome Cornwall. Puck drop is 6:30 p.m.