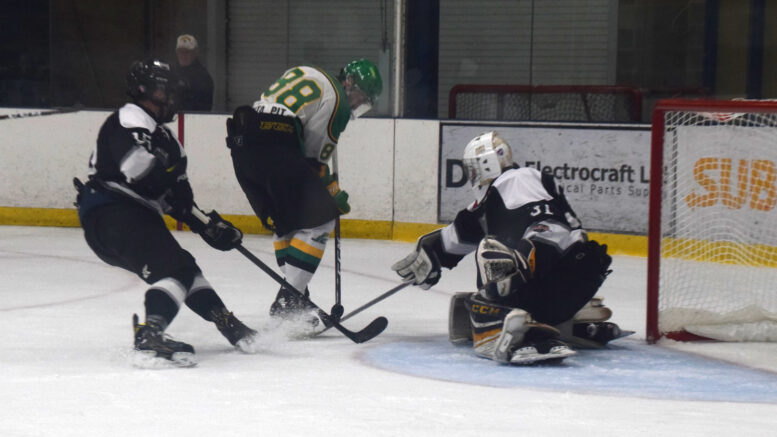 Raiders goalie Mitch Bown pokes the puck away from Amherstview's Elliott Belzile during friday's game at the SPC. Photo by Adam Prudhomme.

A pair of weekend wins capped off a flawless 6-0 September for the Napanee Raiders, who are showing no signs of a Schmalz Cup hangover in the early going.

After a hard fought 4-3 win at home over the Amherstview Jets on Friday, the Raiders cruised to a 12-0 win over the Georgina Ice on the road Sunday afternoon.

Sunday’s win gave the Raiders a season sweep over their Orr Division opponents, as Napanee defeated the Ice  8-2 one week prior in Napanee.

The Raiders picked up right where they left off the previous week, jumping to a 3-0 lead just 6:44 into the game. Curtis Marrison, Devon King and Marshall McFarland each had a goal, all within a two minute span. McFarland’s goal was the first of a three goal performance, his second of the game coming in the final seconds of the first period to build a 5-0 advantage. Evan Foley also chipped in with a goal in the opening frame.

Brodie Maracle and Jacob Gilbert each notched a goal in the second while Nic Case, Alex Case, King, McFarland and Gilbert all tallied one in the third.

Bailey Maracle was a perfect 25-25 in save chances to earn the shutout. Georgina’s Alex Surzycia gave up the first eight goals, giving way to David Giancola for the final four. All told the Raiders fired 73 shots at Georgina keepers. With the loss, the Ice fall to 1-6 on the year.

Friday’s game was a lot more competitive, as the unbeaten Jets came to Napanee for a battle of the Tod Division’s top two teams.

Soren Zamuner scored twice in less than a minute to give the Raiders a lead they’d never relinquish. Amherstview’s Jaydon Wood cut the lead to 2-1 to close out the first.

Marrison restored the two goal lead early in the second, a score that held until the final seconds of the second when Cody Smith brought the Jets to within one.

Logan White scored what would prove to be the game winner just passed the five minute mark of the third. Smith responded just seconds later to set up a nervous finish, but that’s as close as the Jets would get, ultimately falling 4-3.

Mitch Bown earned the win with 22 saves while his counterpart Brady Sarazin finished with 33.

Napanee will look to keep rolling in October when they welcome the Port Perry Mojacks to the SPC on Friday night at 7:30 p.m. On Sunday they visit Little Britain to face the Merchants at 7:30 p.m.