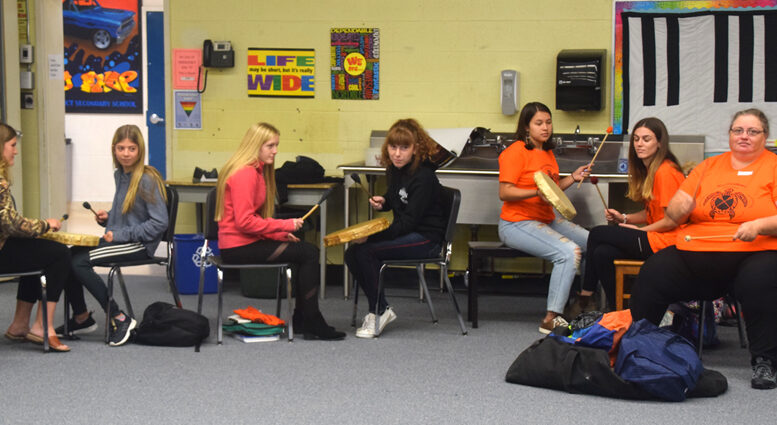 Bright orange could be spotted throughout the halls of Napanee District Secondary School on Monday as the local high school did its part to mark Orange Shirt Day.

They joined in a movement observed by schools across Canada to show solidarity for Indigenous children who were sent to residential schools, removing them from their families and forcing them to learn English or French in favour of their own culture’s beliefs and traditions.

To help mark the occasion four NDSS students-Rachel Wilson, Rachel Thompson-Lynk, Sarah Wilson and Hannah Wilson, designed a shirt which was available for their fellow students to purchase. On an orange background they included several Indigenous symbols including a turtle-for Turtle Island, which Indigenous people often refer to North America as, lacrosse sticks, the word ‘hello’ written in several Native languages and the hashtag Every Child Matters. “The lacrosse stick is how (Indigenous people) used to figure out their issues instead of using violence and I thought that would be a good representation of coming together as a country and just showing that we can solve our issues without violence,” said Thompson-Lynk.

The girls took on the task of designing a shirt when approached by World Indigenous Studies teacher Karen Randall.

“(It was a chance) to use our platform at the school to help out the small but mighty people of colour that we do have at the school,” said Hannah Wilson. “This helped to give a voice to some of the kids at the school even if they didn’t know they have one. Not just Indigenous, but every kid. Every kid that felt like a minority or an outcast, I think it helped. It helped me. It helped me feel more a part of the community.”

To help celebrate the day, Danka Brewer of the Algonquin Nation visited the school to share with students stories, traditional drumming and how to make fry bread.

Orange Shirt Day is observed nationally in honour of Phyllis Webstad, who wore an orange shirt to her first day at a residential school in British Columbia. The teachers stripped her of her shirt and never returned it. People are encouraged to wear orange every Sept. 30 as a way to honour those who were sent to residential schools and to stand up against bullying and racism.