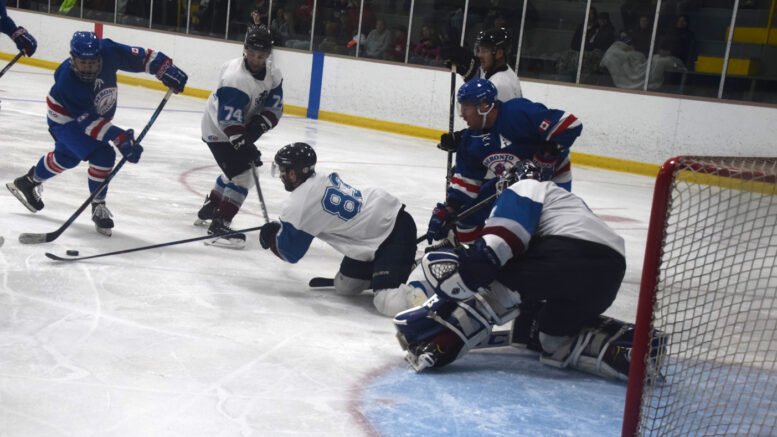 Deseronto's Joey Mayer takes a shot through traffic during Saturday's game at the Deseronto Community Arena. Photo by Adam Prudhomme.

Hockey returned to Deseronto in thrilling fashion on Saturday as the Bulldogs rallied for a 7-6 overtime win over the Cornwall Prowlers in the inaugural Eastern Ontario Senior Hockey League game.

Playing in front of a packed Deseronto Community Arena of over 500 fans, the Bulldogs didn’t disappoint as they scored twice in the final minute of regulation to push the game to overtime. Braedyn Asselstine sent the fans home happy, scoring unassisted just over eight minutes into overtime.

The overtime goal marked the first lead of the game for the Bulldogs, who spent the majority of the game playing catch up.

Cornwall’s Storm Adams scored the game’s first goal, and the first goal of the EOSHL, 2:10 into the first period.

Bulldog’s captain Jeff Morris responded just over two minutes later, recording the first goal in franchise history. His former Deseronto Storm teammate Todd Munden earned the assist on what would be the first of a hat trick night for Morris.

Adams gave the Prowlers the lead again at 12:08, a lead that held into the first intermission. Chris Roglasky tied it at 3-3, only to see Cornwall’s Devon Burns retake the lead less than three minutes later.

Morris picked up his second of the night within the opening seconds of the third to tie the game at 4-4.

Cornwall would respond with goals at the 3:49 and 5:09 mark to open up their first two goal advantage of the game.

Just when it seemed as though the Bulldogs’ rally magic had worn out, Morris completed his hat trick with under a minute left in the game to pull within one, followed by Mitch Merry’s tying goal with just nine seconds left on the clock.

The momentum carried into overtime as Asselstine iced the game winner. Graeme Gemmill picked up the win with 28 saves on the night. Frederic Roy took the loss, facing 54 Deseronto shots.

Deseronto’s power-play unit was strong, scoring four times on 12 opportunities. The Prowlers meanwhile were scoreless on all eight of their man-advantages.

The Bulldogs are back home for their second game of their 18 game season this Saturday when they welcome the West Carleton Rivermen. Puck drop is 6:30 p.m. at the Deseronto Community Arena.

Prior to Saturday’s season opening puck drop, the players were formally introduced and Deseronto mayor Dan Johnston spoke to the crowd.

The newly formed EOSHL is made up of four teams, sporting rosters of players who have aged out of junior level hockey, which maxes out at age 21. For a complete schedule and standings, visit www.EOSHL.ca.