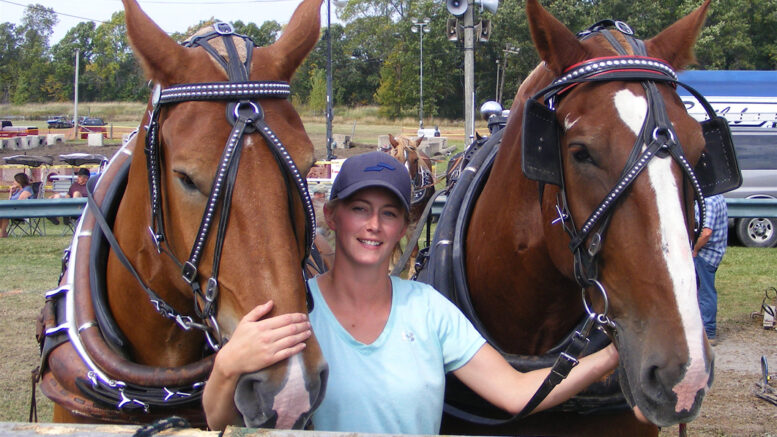 Kaylin Hayes of Belleville shows some love to her husband Kyle's gentle team of Belgians, Ted (left) and Rex, who were waiting their turn to compete in the horse pulls on Sunday, Sept. 22, during the Mohawk Fair in Tyendinaga.Photo by Terry McNamee.

Feats of speed and strength, cute and cuddly critters, and chicken dropping bingo — what could this be? It was all part of the 2019 Mohawk Fair held in Tyendinaga on Sept. 20-22.

There were live dogs in the pet show and Chase the police dog from Paw Patrol, mechanical horsepower in the demolition derby, kid horsepower in the Power Wheels Derby and real horsepower in the horse pulls. Other feats of strength came during the Strongman competition and the championship wrestling show. And that was just part of what made this year’s fair a popular draw.

“This is actually one of the busier years,” commented Kristie Istead of Bloomfield. “It’s a nice turnout.”

Istead was at the fair with animals from Kristie’s Little Portable Petting Zoo. The sheep and the Ewok (Ewok is actually a white angora rabbit) were big draws for children. Many had never felt the cloud-like softness of an Angora’s hair, which, as Istead explained, is what is used to make wool for Angora sweaters.

Other events included a baby show, a scarecrow competition, a classic car show, kids’ games and, of course, competitions for crafts, foods, garden produce, poultry and small animals such as rabbits. Music was provided by a local talent show, old-time fiddlers and bands.

“I believe it was a very good success,” she said. “Our gates were up, and we had lots and lots of volunteers. We had more poultry than we’ve had in years. We had more cars for the Show ‘n Shine than we’ve had in years. The quality of the vendors was really high.” And, she said several of the home craft exhibitors had their entries qualify for the Ontario Association of Agricultural Societies competition in November.

Several things were new this year.

“(People) really enjoyed the championship wrestling,” Brant-Francis said. “I had lots of positive comments about them. We had an exotic animal show. The kids were able to see and pet them. They were a new group this year. One of the unique features that we had this year was the Seed Sanctuary, which has moved to Tyendinaga.”

In October, organizers will begin planning for the 2020 Mohawk Fair. To become involved in helping the fair, send an email to mohawkag@gmail.com.