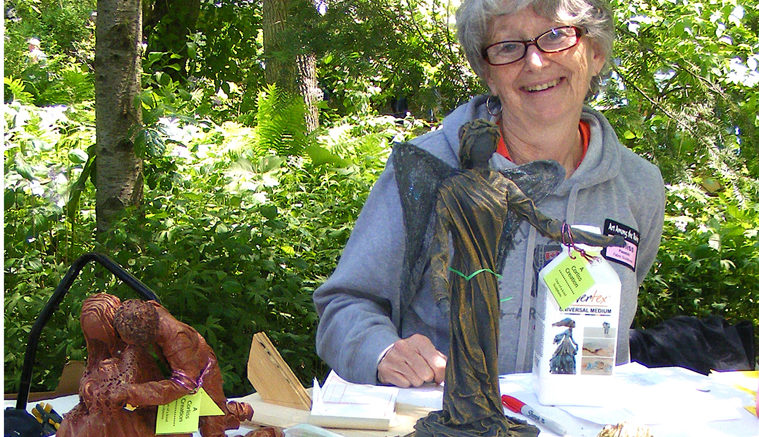 Elegant fabric-based sculptures by artist Corliss Piazetski of Wolfe Island were popular with visitors to Art Among the Ruins in Newburgh on Saturday, June 15. Photo by Terry McNamee

Here be dragons, dancing figures, whimsical glass pieces, and so much more, all part of the 14th annual Art Among the Ruins, a show and sale set next to the ruins of the 19th century Newburgh Paper Mill beside the Napanee River in Newburgh.

The site once featured a saw mill, an iron foundry and an agricultural implement factory, and later a saw and grist mill. The site has been derelict for more than 80 years, but the ruins, which are on private property, have been preserved by the current owners.

This year’s event attracted a big crowd and featured the work of more than 65 different artists from across southeastern Ontario. There was everything from fine art, photography and various types of sculpture to fabric arts, wood-burning, wood turning, glass arts and a wide variety of jewellery and artisan items such as handmade soaps, paper, furniture and bird houses.

William Vanwart of Roblin had a wide selection of his Missing Eat Studio original paintings on display. Many of the visitors to the show stopped to chat with him, including former art pupils.

“I taught at the high school in Napanee for 20 years-ish,” Vanwart said. “I’ve been involved in the show since the beginning. I love the people (the Andersons) that put it on.They’re the best. The setting is amazing, and the number of people who come out is just amazing.”

Corliss Piazetski of Wolfe Island and her sister, Kingston resident Michelle Dorey, also had a large display. Piazetski’s whimsical Victorian human sculptures caught the eyes of many visitors, while others were startled to be confronted by her sister’s amazing dragons that moved with the wind. Both use stiffened fabric as the main medium for their creative sculptures.

“This is our sixth year,” Piazetski said. “We enjoy it. It’s a lovely spot and the people are nice.”

Amherst Island was represented both artistically and musically by Ross Stuart of Metal Stringed Instruments. His banjos and fiddles are made from odd bits of metal, like old cans, but they are not just ornamental.

“These are all musician-quality instruments,” Stuart said. “I  started this in 2006, and moved to Amherst Island in 2016.”

He said his unusual instruments have been sold and played all over the world and have been used by buskers, on cruise ships on stage, on soundtracks and even in movies.

Artist Béatrice Eberhard of Gananoque had her mixed media works, collages and textile collages on display under a tent, which proved useful later in the day when rain arrived. But that didn’t slow her down at all.

“It’s a good crowd and it’s such a beautiful place,” she said. “This is my first time here.”

Anyone interested in becoming one of the exhibitors at next year’s show, or volunteering with the 2020 event, can send an email to info@artamongtheruins.com or call 613-378-6516.