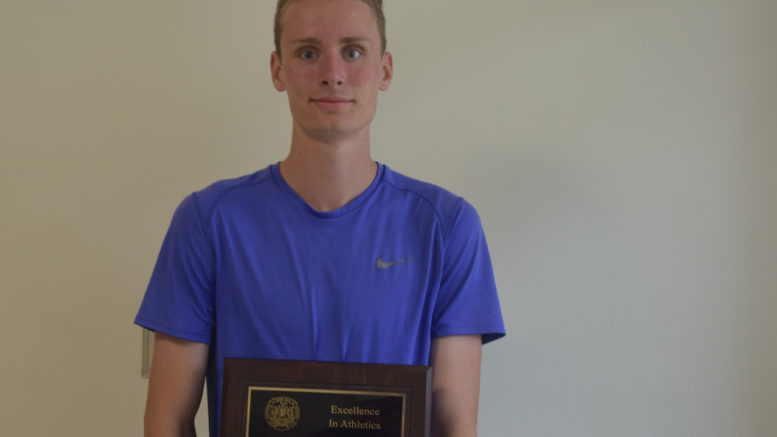 Napanee long-distance runner Carter Free will represent Canada at the Pan American U20 Championships in Costa Rica next month, participating in the 1,500 metre.

The 19-year-old NDSS graduate was one of 47 athletes named to Canada’s roster which will compete against athletes from 31 different countries within the Americas, July 19-21.

“My mom, she came out of her car with a bunch of Canadian flags,” Free said of how he learned he’d made the Pan Am U20 team. “She let me know I was on the team and I was just freaking out. I was over the top excited.”

This will mark the first time Free will represent Canada at the international level.

“Putting on the uniform for Canada and hopefully achieving my personal best,” he said of what he’s looking forward to most about the games.

“I’ve been running competitively for three years,” he said. “At the start (being named to Team Canada) was something I never expected to achieve. My goal at the start was just to make OFSAA. Just make it and I’d be happy. Then I kept getting better and better and eventually (making Team Canada) turned into the goal. Now to achieve it, that feels great.”

As a member of NDSS’ Golden Hawks he excelled at both cross-country and long distance track, qualifying for OFSAA in both. Leading up to the Pan Am games he’ll continue to train with the Quinte-Frontenac Track Club as well as prepare for his first season with the St. Claire College cross-country team in Chatham-Kent, Ont.

Free was the guest of honour at this weekend’s Napanee Heritage Race, a race in which he set the course record just last year. Unfortunately his schedule didn’t line up this year, as he had another race in London, Ont. on Sunday. Instead he had the honour of officially starting this year’s event.

“I was annoyed I couldn’t run it but I had to race the next day,” said Free. “It was still an honour to start it and be recognized by the town.”

Though he had to skip his hometown race he made good use of his trip to London, setting a personal best 1,500 metre time of 3:47.78, which also set the new Canadian mark at the U20 level.