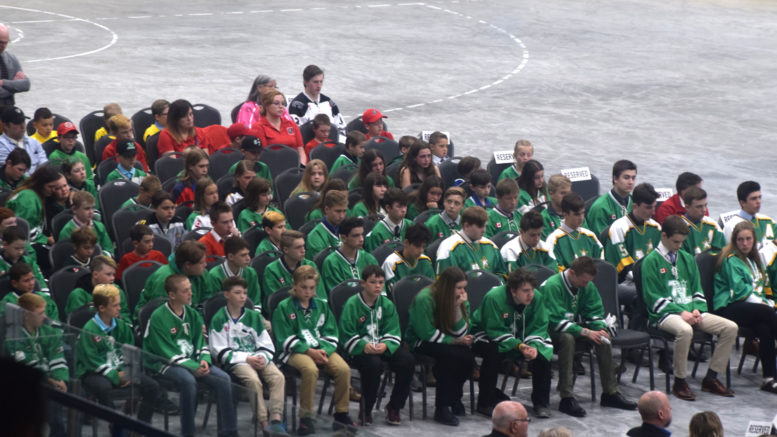 Camden Arthur's friends and teammates donned their Napanee Stars jerseys as special tribute during a celebration of life held in June at the SPC. Photo by Adam Prudhomme.

Camden Arthur’s time on earth was short, but undeniably impactful.

That was evident Tuesday morning when mourners filled the bleachers at the Strathcona Paper Centre to bid farewell to the nine-year-old.

Teammates and friends donned Napanee Stars, Crunch and Express jerseys to honour the boy who united the community through the Camden Strong movement, formed when he was diagnosed with a rare form of childhood cancer. Residents came together to help raise money and show support through his battle, which saw he and his family have to spend two months in Boston to receive treatment.

“Our hearts are heavy,” said Rev. Barbara Mahood of the Newburgh Centreville Pastoral Charge, who led the celebration of life ceremony. “We desire answers and we need assurance. May that be so in this time.”

“Camden Glenn Richard Arthur, a light that will continue to shine on in our community, in our lives and in our hearts for years to come,” added Mahood.

Speaking on behalf of parents Shane and Sarah, as well as his siblings Mason and MacKenna, Mahood said the community support made a difficult time just a little brighter.

“Thanks to so many of you, the food coming to the door, the calls, the texts of support,” said Mahood. “This family is coping as well as they are because of support of good friends and family who are walking beside them.”

Mike Airhart, who not only coached Camden but was a close family friend, spoke of the impact he made.

“From the moment Camster was born, we all knew we had a special boy on our hands,” said Airhart. “Right from the get-go it was clear Cam loved being outside. Whether it was crawling around on the pool deck, riding his scooter, playing Nerf guns or being in the driveway shooting pucks on his rollerblades, the one thing Camden loved most, he loved playing ministicks.”

Airhart recalled a trip to Daytona Beach his family took with the Arthurs, when their kids turned the beach into a hockey arena, using shovels as sticks and shooting into nets made of sand.

“Camster could barely walk but he was right in there, throwing elbows and he even buried a few,” recalled Airhart.

Paul McGarvey, also a close family friend, drew upon Camden’s love of hockey when he penned a poem in tribute.

“As Camden Nobody Stronger, we find strength in you,” said McGarvey. “Never did you shed tears or drown in personal sorrow. You only met each day with a desire to reach for a better tomorrow…Although your time was brief, your existence is everlasting. So go to your game now my sweet boy and show them why you were drafted. A little dipsey doodle, a dangle or a bardown, your silky mitts will lead the league and your big heart will inspire.”

“This trade was very painful and really makes no sense,” continued McGarvey. “No words can be spoken or uttered in defense. When this nightmare ends and we are reunited, no movement clause or no trade will ever be required. Until we see you again, my sweet boy Cam.” 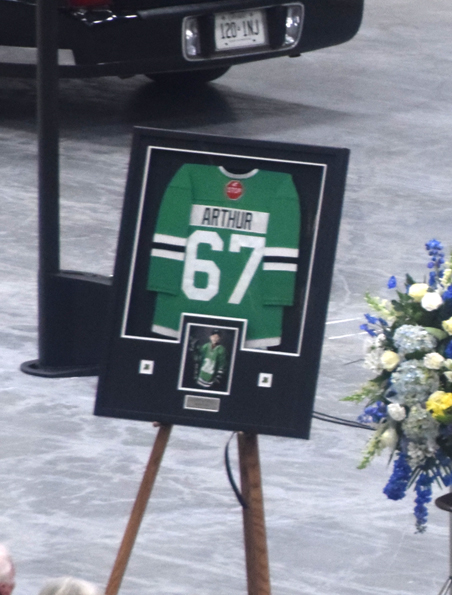 As a special tribute, his jersey was unveiled during Tuesday’s ceremony and it was announced Napanee District Minor Hockey would retire the number.

In a tribute that was uniquely Camden, the ceremony concluded by encouraging those in attendance to cheer as loud as they could as they said their final good-bye.