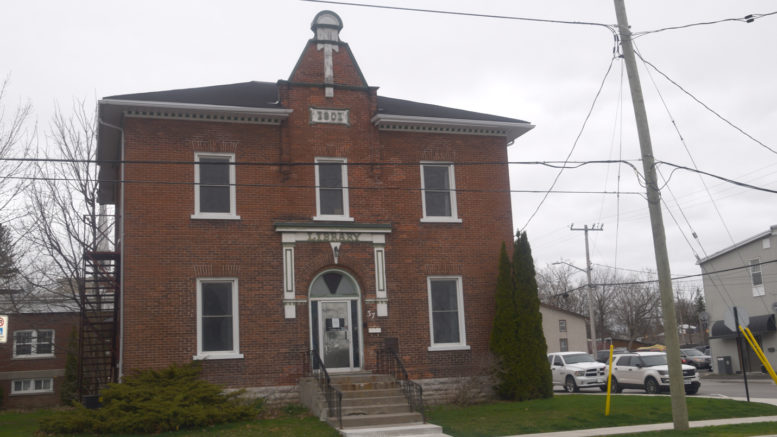 The Old Library, located at 37 Dundas Street W, has been declared as surplus and could be put up for sale by the town. Photo by Adam Prudhomme.

A century old building known colloquially as Napanee’s Old Library could soon be put up for sale after Greater Napanee council deemed the property as surplus.

Located at 37 Dundas Street W, the building was recommended by town staff to be listed as having ‘cultural heritage value’ before being listed as surplus.

Doing so would give council 60 days to examine the building for artifacts that would be of interest to the town should a buyer file to have the building demolished. The listing however would not have any power in forcing a new buyer to keep the facade of the building.

According to a report submitted to council the property cost the township $10,434 to maintain last year and has an annual deficit on the building of approximately $4,000. In January a professional real estate appraiser valued the property at $212,000.

Council voted unanimously to adopt staff’s recommendation to list it as both surplus and as having cultural heritage value. Mayor Marg Isbester however excused herself from the vote, citing a potential conflict of interest.

-Members of the Napanee Cemetery Board appeared before council to explain their $30,000 grant request made earlier this year.

Council would ultimately vote to receive the information and asked Greater Napanee’s general manager of community and corporate services Bränt Zatterberg to review their financial statements and put together a report for the May 14 regular council meeting.

“We are humbly coming before you today to request financial assistance as our plight leads us to hardship due to lack of burials and opening and closing of graves,” said Mary Berndt, the board’s chairperson. “Monetary donations have been next to nil and we are currently beginning a new season which entails in addition to burial and grass cutting, tree trimming and general maintenance of the graves.”

The board has also been in arrears since last year.

“We are a small group and can only do so much,” said Berndt. “We are of the opinion that if we do not obtain some assistance then we may have difficulty maintaining Riverside and Riverview Cemeteries.”

Isbester noted the town had just asked staff to find $60,000 in savings before passing the budget just one week earlier.

“It’s not an easy business, but really at this point I can’t foresee, nor would I support a resolution that would hand $30,000 to them,” said Isbester.

Deputy mayor Max Kaiser, who put forward the motion, agreed and said he’d like to see some options before deciding what, if anything, the town would give the Cemetery Board.

“I know there’s been a cultural shift from traditional burials to cremation and that’s happening across the board,” said Kaiser. “If that shift is happening, then the business model has to shift with it.”

Berndt said as a last resort, the board may have to turn the cemeteries over to the town.

Councillor Dave Pinnell Jr. supported the motion, asking that council put a time frame on the report. After some discussion, it was determined that the report would likely be ready for the next regular meeting.

-Voodoo Rockfest will be held a bit earlier this year, as council voted to accept event organizer Joe Matthew’s request to push the date from Sept. 19-21 up to Aug. 8-10, thereby granting a noise exemption for that weekend. The rock n’ roll event, now in its third year, will be held at the Napanee Fairgrounds.

-Greater Napanee Emergency Services deputy fire chief Joe Koenig was appointed community emergency management coordinator, while chief Rob Serson and deputy chief Bill Hammond were named as alternates. the appointment fulfills the town’s obligation to the province’s Emergency Act, as the role had been vacant with Koenig serving as interim coordinator. The timing of the appointment was appropriate, as council also voted to officially recognize May 5-11 as Emergency Preparedness Week.

-The Loaf n’ Ale will once again have permission to turn a portion of the sidewalk in front of their Dundas Street restaurant into an outdoor patio for the summer season. The patio must be removed by Sept. 30.