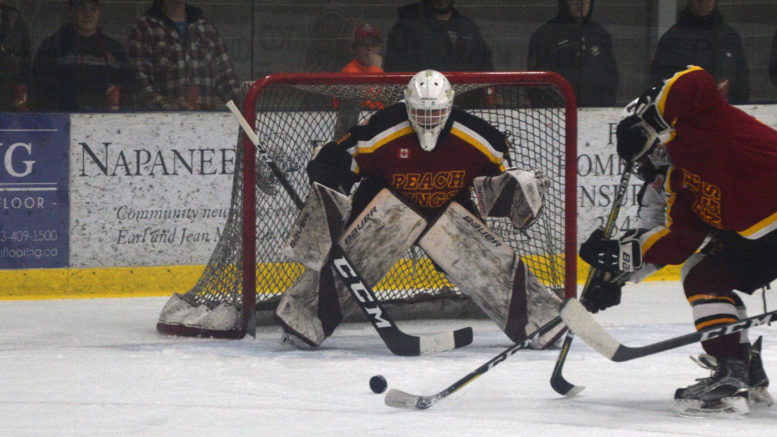 Riley Maskell of the Peach Kings stopped 35 shots on Sunday to lead his team to a 3-2 victory over the Napanee Raiders. The Schmalz Cup Finals are now tied 1-1 with Game 3 set for Friday in Napanee at 7:30 p.m. Photo by Adam Prudhomme.

As the horn blew to signify the end of the third period in Sunday’s Game 2 of the Schmalz Cup playoffs, the Napanee Raiders found themselves in unfamiliar territory-down a goal.

The Grimsby Peach Kings became the first team to defeat the Raiders this postseason, hanging on for a 3-2 victory on home ice to even the series at 1-1.

Evan Brown doubled the lead for the home team with a power-play tally at 8:48.

Napanee’s Dayton Kent responded late in the second period with a power-play goal of his own to cut the deficit to 2-1. Evan Foley drew an assist on the play.

DeTullio struck again less than five minutes into the third to put the Peach Kings back in front by two. That score held until the final seconds of the game when Napanee’s Ryan Casselman scored unassisted to pull the Raiders to within one.

That was as close as they’d get however as Napanee suffered their first loss in 18 playoff games.

Riley Maskell stole the win for the Peach Kings, stopping 35 shots for the win. Nicholas Nabuurs turned away 22 shots in the losing effort.

Napanee had its chances, earning eight power-plays but managed just one goal. Grimsby meanwhile was 1-4 on the man advantage.

The two teams will be back at it this Friday at the SPC for a pivotal Game 3. Puck drop in Napanee is 7:30 p.m.

The series will return to Grimsby on Sunday for a 2 p.m. start time.