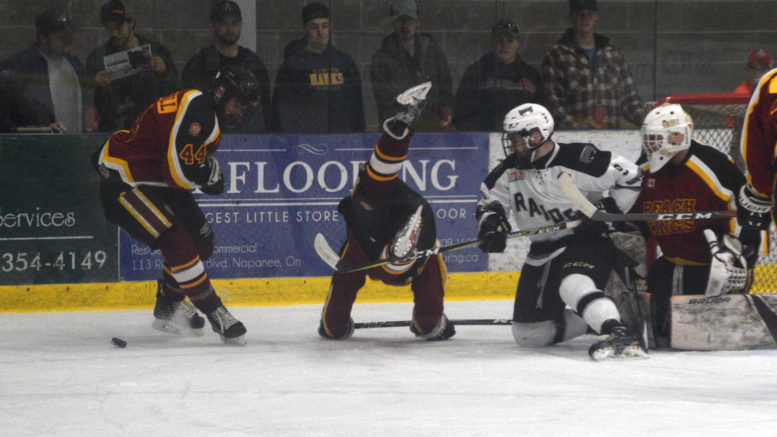 Grimsby's Jaleel Adams goes head over heels as Napanee's Austin Labelle battles for puck control at the side of the net in Game 1 of the Schmalz Cup Finals at the SPC held in April. Photo by Adam Prudhomme.

A boisterous hometown crowd behind them, the Napanee Raiders didn’t disappoint with a crucial 2-0 victory over the Grimsby Peach Kings in Game 1 of the Schmalz Cup Finals tonight at the SPC.

Napanee had out-chanced Grimsby for much of the opening frame, but had nothing to show for it despite leading 11-4 in shots after the first period. Their persistence paid off in the second when Cam Harris finally solved Peach Kings keeper Riley Maskell at the 7:25 mark of the second. Evan Foley and Greg Powles drew assists on the play.

The Raiders would continue to dominate the time on attack the rest of the way, but still had to ride a nervous finish right down to the wire. Raiders goalie Nicholas Nabuurs was outstanding when he had to be, turning away 19 shots for the shutout. Ryan Casselman sealed the win with a valuable empty-net goal with just 55 seconds left on the clock. Neither team was able to generate much on the power-play as Napanee was 0-4 while Grimsby was 0-3. Napanee finished with 34 shots total.

Grimsby meanwhile has been here before, rallying from down two games to one in their previous series to reach the finals.

Napanee will look to take a commanding 2-0 series lead on Sunday when the series shifts to Grimsby. Game time is 3 p.m.

Game 3 returns to Napanee a week from tonight with a 7:30 p.m. start time.

An estimated 850 fans attended Friday’s Game 1, with a good mix of Grimsby supporters among the crowd.