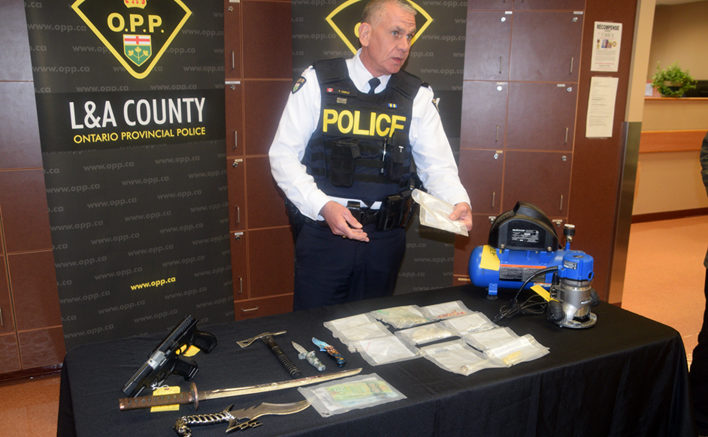 Lennox and Addington County OPP detachment commander Insp. Scott Semple shows some of the drugs found during a search warrant executed in Napanee in April. Photo by Adam Prudhomme.

Officers from the local detachment executed a search warrant at Napanee residence located on Dundas Street W and arrested a 40-year-old Napanee man and 37-year-old Napanee woman. During the search police seized a quantity of methamphetamine with approximately $1,500 worth of street value as well as hydromorphone, fentanyl, cash, replica hand guns, knifes, swords and stolen property.

“This is a warrant that was executed (Wednesday) morning at 5 a.m. in relation with community concern with methamphetamines in the community,” Semple told media during a press conference held at the L&A OPP detachment, standing in front of a table displaying the seized items. “Acting on an investigation, they were able to execute the search warrant and seize weapons and cash.”

Semple says its not uncommon to recover weapons in drug search warrants. Though the hand guns were replica, they didn’t contain an orange tip to indicate they weren’t real, which Semple says indicates they could be used as intimidation.

“This is just indicative of what we see with people that are involved in the drug trade, there’s violence associated with it,” said Semple.

Also displayed on the table was more than a dozen evidence bags filled with drugs-illegal and prescription.

“We suspect that there is fentanyl in here which is obviously a huge issue and has been in the area as well,” said Semple. “We’ve been seeing a lot of blue and purple fentanyl in the area and carfentanil as well.”

Fentanyl has been described as an epidemic across Canada, as even just a small dose can be lethal.

“Here’s a warrant execution primarily looking for crystal meth, yet we see fentanyl,” said Semple. “That’s actually becoming the norm now. Any search warrant we execute for narcotics, whether it’s the primary narcotic or the secondary one, we’re seeing fentanyl or carfentanil almost at every one.”

Also on display at the press conference was 100 pounds of packed cannabis that was recovered following a completely separate incident involving a collision on Hwy 401 in Belleville on Monday afternoon.

“It was a motor vehicle collision and then (the driver and passenger) took off on foot which was highly suspicious,” said Semple. “There was a K-9 track attempt but they were actually apprehended walking the road with the assistance of Belleville Police services and our L&A County OPP.”