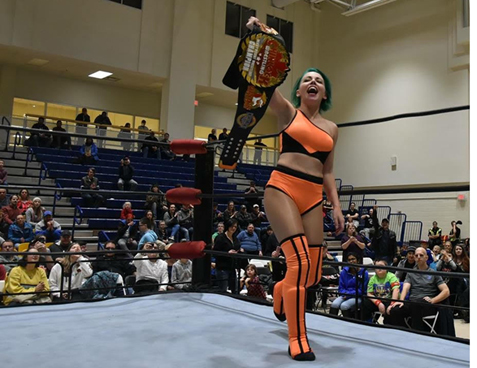 Chinlock Wrestling Champion Jessie Mack celebrates after retaining her title against Madison Rayne in December at the Queen’s Athletics and Recreation Centre.

Chinlock Wrestling will make its Napanee debut on April 27 at its new home located at 824 Palace Road.

Headlining the card will be an intergender heavyweight championship match between the defending champion Jessie Mack and ‘The Immaculate’ Ray St-Jean.

“Jess has been our champion since our third show,” said Chinlock co-founder and Camden East native Jan Murphy, who founded the company in 2015 with Justin ‘CJ Felony’ Cousineau. “Her and Ray had an interaction at our last show and he let her know that he does not believe women of any size should be a champion, especially women of Jessie’s smaller stature. He feels a big muscular man like himself should be the champion. Jessie begged to differ, so we’re going to put them in the ring and see what happens.”

Once a rare occurrence to have male wrestlers squaring off against females, the recent trend in the industry has seen more intergender matches. Murphy says it’ll be a first for Chinlock.

Also on the card will be a match between Addy Starr and Beautiful Beaa. Once a familiar face on the local wrestling scene, Starr will be making her return after spending a few years living abroad in the U.K.

“We’re thankful to have her back and Beautiful Beaa, both making their Chinlock debuts,” said Murphy.

KL Shock will also take on Johnny Irvine in a qualifying match for the Kale Murphy Memorial Championship, with the winner taking one step closer to wrestling for the belt on June 15 as part of Chinlock 5, to be held at Kingston’s Leon’s Centre. The championship is named for Murphy’s brother, who passed away in a car accident in 2006.

A tag-team match between Freak Nation and Double Dragon is also scheduled.

The Palace Road venue will not only serve as site of the April 27 show, but also be the home of Chinlock Wrestling School. Led by instructors who have in-ring experience, the school will show the ropes to up and coming entertainers. Classes will be starting in May.

“We’re ready to develop some of our own talent,” said Murphy. “It’s always fun to bring in other talent from around Ontario and the Northern U.S. but this is our chance to create our own talent and secure our future and give opportunity to people in our community.”

Tickets to the April 27 show, which gets underway at 7 p.m., as well as information about the school can be found at www.ChinlockWrestling.com. Tickets will also be available at the door.