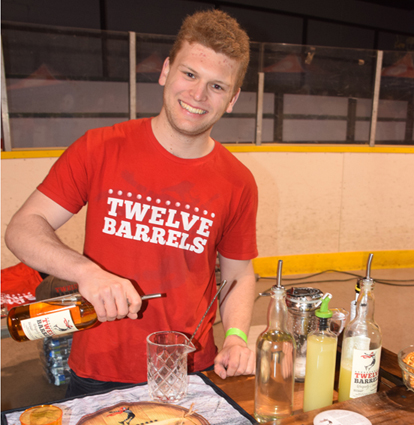 Cole Miller of Twelves Barrels mixes a drink during Napanee's Take Over event. The Napanee native has recently teamed with Iconic Brewing to release a line of cannabis beverages. File photo.

The inaugural The Take Over food and beverage event left such a good taste last year that the Napanee and District Chamber of Commerce has ordered a second helping.

Chamber executive director Megan Sands confirmed the event will return to the Lennox Agricultural Memorial Community Centre on May 11.

The bigger-and-better event will feature a range of beer, cider, wine and other beverages from producers across the region. There will also be opportunity to try local foods.

“We have a good variety of Chamber members as well as non-Chamber members. It is very much local in terms of within the Napanee-Picton-Kingston area,” Sands said.

There will be a mix of new and returning vendors offering their wares after the inaugural event exceeded the organizers’ expectations in terms of vendor and visitor participation.

Although alcoholic beverages are featured prominently, Sands also stressed the Take Over will cater to food and beverage enthusiasts of every age.

“It’s an all-ages family event. We noticed people had lots of fun last year bringing their little ones,” she said. “There are games and non-alcoholic varieties for anybody who doesn’t want to try samples of wine, beer, or cider.”

Adding to that family concept is the scheduling of this year’s event on the Saturday of Mother’s Day weekend from noon to 7 p.m. Children will 12 and under will be admitted free of charge, while those 13-18 will be admitted with a donation of two non-perishable items to  Napanee’s Salvation Army food bank.

Until April 20, there is a special early bird offer that allows tickets to be purchased for $12 each or $40 for a group of four. The tickets come with an event sampling cup and two tokens.  As of Saturday, those prices will rise to $15 per person or $55 for a group of four. ‘

The tokens, Sands explains, can be used for those of age to sample alcoholic beverages. Food samples are by cash sales only.

IG Wealth Management is the title sponsor, Nesda Technologies and A Touch of Wellness are platinum sponsors.