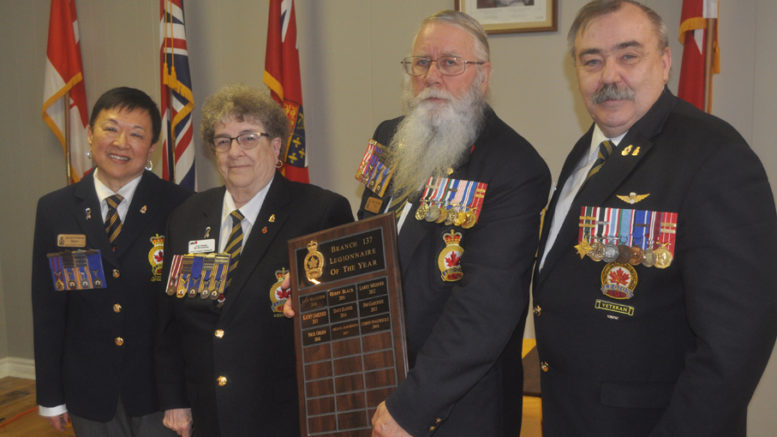 On Sunday, the Royal Canadian Legion’s Branch 137 gave thanks for more than 8,000 hours of volunteer contributions over the past year.

“Even at minimum wage, you can understand what the cost would be,” said the branch’s awards and honours chair Jim Gardner. “We certainly appreciate our volunteers. They pay an integral part in our great branch.”

After enjoying a lunch catered by the Napanee branch’s own membership, members and guests enjoyed an afternoon filled with presentations for length of service, efforts on various committees or the branch executive, and a series of accolades presented to those who have gone above and beyond the regular call of duty.

Gardner explained there were honourable mentions — given to 11 members as a way to say thank you for their efforts. There were also Awards of Achievement and Awards of Merit given to those who have worked hard over a longer time period. Then, there were three major awards: The Legionnaire of the Year, a selection of Branch Service Medals, and the Bill and Iris Perrin Humanitarian Award, which was presented for just the second time that afternoon.

“Our appreciation comes in many forms and we do it by giving recognition by saying it’s a step forward. You work toward the highest recognition,” Gardner said.

Tim Smith, the former awards and honours chair, who played a key role in creating the Perrin Award last year said that it goes to those who unselfishly promote the welfare and happiness of others. This year’s recipients, who happen to be a husband and wife team like the Perrins, have worked hard doing just that since coming to Napanee in 2004 upon retirement from a career in the military.

Bonnie Magilton serves on the ways and means committee, cooks Friday lunches, makes food for special events and funerals, and created curtains for the upstairs level of the building. She is active in the Women’s Institute and Legion branch functions.  Her husband, Jack, is a life member and past president of the branch and has held nearly every volunteer position in the Legion. He is the cook and purchaser for the Friday lunches and assists with serving veterans.

Bonnie admitted being quite moved, having known the Perrins.

“It’s an honour to be remembered in the same voice that they are being remembered,” she said.

Jack added that service is the element that brought them to the Legion.

“It’s friendship and comradeship and, for us, being so long in the military it’s a little bit of a way of paying back for veterans and helping the community and seniors. That’s the way we look at it and we’re quite happy to do it.”

Both indicated that being able to work together has made their efforts satisfying.

“It’s really nice to have your spouse by your side and know that she believes in the same thing you do,” Jack said.

Added Bonnie: “We are a team, we always have been.”

This year’s Legionnaire of the Year has served for 11 years and taken on some important roles. While branch members might rib Chris Ingersoll about his long hair, they’ve come to appreciate his dedication as the service officer who leads efforts on behalf of veterans and their families and the chair of the finance committee. He’s also a two-term past president that participates actively in the Poppy campaign, the ways and means committee, the Napanee Fair food booth and at entertainment events at the Legion hall.

Ingersoll was moved by the recognition.

“This is a place I really believe in. It does a lot of good work for our community and our veterans. I feel super. Its’ a good day for me,” he told the Beaver.

Ingersoll served in the Canadian Army until his retirement in 2006 and he joined the Napanee branch the following year. He hasn’t stopped working since.

“My wife probably thinks I’m too busy here, but there’s a lot of things I can do and I like being busy. It’s an easy thing to do,” he said. “I think I’ll be busy here for a while. The big thing is the veterans and the support for them. It’s really needed. We have lots of retired and serving veterans that need it and this is the best way to help throughout the year.”

Ingersoll said he is continually pleased with the support the branch receives from volunteers among its membership as well as the community at large.

Branch Service Medals were presented to Gord Walsh and Dave Thain.  Walsh is an eight-year member who is the second vice-president. He’s active in housing initiatives and also helps with Friday lunches and entertainment. Thain chairs the branch’s ways and means committee, represents the Legion on the Napanee BIA, judges youth contest, directs the Treble Makers music program, sets up sound systems for events and Remembrance Day, and helps with the fair booth.

Highlighting the many recipients of years of service pins were Frank Hamilton, who has been a member for 70 years, Wayne Little (55), James Mitchell (50), and Fred Holmes (45). Hamilton passed away Tuesday.

Deputy district commander Joel VanSnick was impressed with what he saw Sunday.

“I’m having a hell of a day. You guys are just fantastic,” he told a crowd of about 70 people. “I go to a lot of branches, but I have yet to see a branch that is so dedicated to preserve our oath as Legionnaires. You guys do a fantastic job.”

He told members they should cherish their years of service pins because they’ll really mean a lot when they get older and reflect on their time serving. He said those who received service medals can know their branch holds them in the highest esteem, while everyone else appreciated can also know their time is valued.

“(The certificates) may just be a little piece of paper, but the thing is it comes from the heart and that’s what you have to appreciate,” he said. “This is your day. Thank you for all you do for your veterans and your Legion. It will not survive without a backbone.”

Thankfully, as Jack Magilton concluded, Branch 137 doesn’t have that worry.

“We’re fortunate here. We’ve got a lot of volunteers and Legions don’t work without volunteers… It’s quite an honour, actually, to be involved with this branch.”