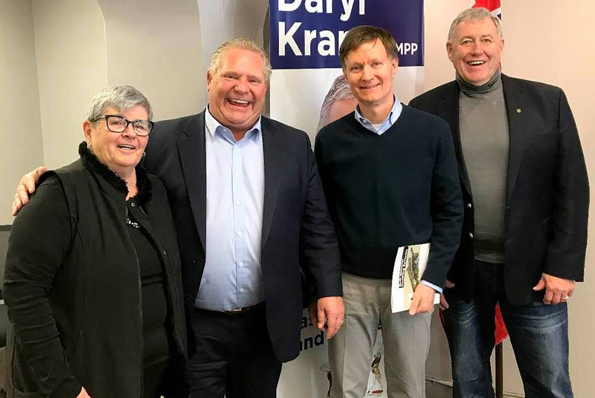 Protests disrupted a private tour of a local business scheduled for Premier Doug Ford, Saturday, but he managed to complete some business during a stopover downtown.

Word spread early in the day that Ford was intending to visit Continental Conveyor’s Richmond Boulevard facility that afternoon to make an announcement, though there was no official announcement of any appearances as Ford returned to Toronto from engagements in Ottawa.

A source with close ties to the premier’s office confirmed to the Beaver Saturday afternoon that Ford would be in town that evening for a    meeting, but was not planning public appearances or media interviews.

Meanwhile, about 50 protesters gathered near the entrances to Continental Conveyor’s property around 2:30 p.m. with an intention to confront Ford about some of his policy direction, like increased class sizes in secondary schools and changes in the way autism supports were funded.

At about 3:40 p.m. Hastings-Lennox and Addington MPP Daryl Kramp confirmed to the Beaver that he had invited Ford to Napanee and that the planned tour had been cancelled.

“I wanted to provide an opportunity for him to meet with a business of interest with a good news story for our area,” Kramp said, adding he saw the potential for Continental Conveyor to expand its business after being rewarded major contracts related to potash mining in Western Canada.

Given the protest happening, Kramp said in consultation with the parties involved he decided it would be best to cancel the tour and seek alternate arrangements.

“I didn’t want to create a situation,” he said.

Kramp was able to schedule a meeting at his Dundas Street office involving Ford, Greater Napanee Mayor Marg Isbester, and Continental Conveyor president David Lynn. The MP said they discussed opportunities and challenges facing the manufacturer and others in the area.

The provincial government has made mining development in Northern Ontario a priority, creating a working group earlier this month with an eye on streamlining regulation and attracting new investment. Kramp said that could create even more opportunities for the company, which produces systems to transport bulk materials in industrial settings.

“With our strong focus in developing the north and our mining and energy sectors, the products Continental Conveyor builds and uses are definitely going to be a priority for the expansion we’re going to see in those areas. That bodes well for them and companies like them,” he said.

Locally, some of the challenges would include a shortage of skilled labour and a need for infrastructure investment, including broadband. Kramp said positives, like proximity to the 401, an attractive rural lifestyle, and proximity to colleges and universities could be leveraged.

The MP said he felt his riding is “on the positive side” for business retention and growth, but it must address those challenges. He said there’s a number of ways the Province can help. Those include dedicated development funding, possible capital partnerships, and investment in skills training. He said some of those opportunities cross into the jurisdictions of several ministries.

He also acknowledged municipalities have a role to play in economic development and that’s why Isbester was invited to be part of the discussion.

“We had a great conversation. I wouldn’t go much further than that right now,” he said. “There’s a high degree of familiarity with the premier’s staff and the minister himself.”

Isbester said the premier’s interest did represent a good story for a family owned business that has been in Napanee since the 1980s. While she agreed there was talk abut industrial expansion and attraction, the main focus was on praising Continental for its good work — and that’s a plus for Napanee.

“When you’ve got GM plants and so on shutting down, sometimes it’s nice to see little plucky towns like Greater Napanee can keep surviving.”

Isbester said she didn’t wish to get involved in the controversy surrounding the visit, stating it’s her job to work with all parties to make sure they feel welcome when they come to town and there might be potential to attract dollars for the local economy. She also acknowledged fiscal decisions can be tough with “only so many dollars to go around.” That said, she was supportive of the demonstrations too.

“That’s their right, that’s what they believe in.”

Ford visited some businesses downtown and purchased lunch for the party at Seasons Fine Food. Isbester said she’s heard the business has some negative feedback since, which she found disappointing.

“Premier Ford was a customer and he was well treated, as should anyone be that walks in the doors.”