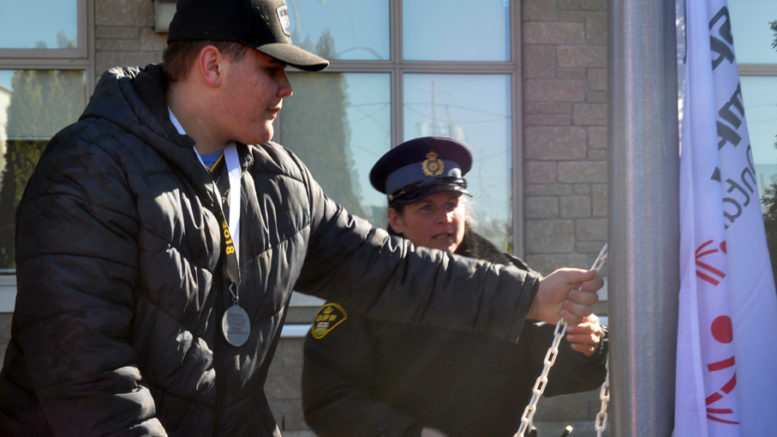 Chris French raises a Special Olympics Ontario flag outside the Lennox and Addington County OPP detachment Monday to mark the 50th anniversary of the sporting movement, while Const. Shannon Cork looks on. Photo by Adam Bramburger.

It’s been 50 years since the first Special Olympics were held at Chicago’s Soldier Field and some local students are proof it’s still creating positive memories.

On Monday morning at the Lennox and Addington County OPP detachment, NDSS Special Olympian Chris French raised a commemorative flag to mark the occasion as his fellow athletes and community supporters cheered. The tradition they are upholding means much to many.

Carol French, a Quinte Detention Centre staffer, who has been involved with the organization of Special Olympics for 30 years and who actively organizes the Law Enforcement Torch Run in support of the activity said it was an honour to share with 50 other communities across Ontario to raise the flag.

“You can’t term Special Olympians any better than that. They’re such special athletes with their determination and their drive. Everyone can learn so much from them,” she said. “It’s so inspiring to watch the athletes and to be able to raise funds. As they’re showing off their team sweaters and medals and they’re able to go to regional games, provincial games, and even national games now, it’s so rewarding.”

Local OPP detachment commander Insp. Scott    Semple said he found it interesting that a Canadian doctor, Dr. Frank Hayden, actually paved the way for the competitions with his research proving that people with intellectual disabilities participating in sport could benefit all areas of their lives.

There’s also a local tie, Semple revealed. In just 50 days, NDSS will be sending teams to compete provincially in basketball, soccer, and bocce at the Special Olympics Ontario Youth Invitational Games in Toronto, starting May 14. He said it’s a great accomplishment for the community.

“Napanee is going to be put on the map and be represented by a great group of athletes. The Special Olympics is meant to break down barriers and foster inclusion and acceptance. We couldn’t be any prouder of all of you guys.”

Kevin Walker, one of the coaches at NDSS who works with the athletes, said he believes all three teams will do well at the tournament, but that isn’t the only focus of their upcoming trip.

“The main thing is we’re going to have a good time, meet with other athletes, and represent our community.”

Walker said at NDSS students can participate in floor hockey, basketball, soccer, and bocce. He said the staff at the school really try to push and promote the program and the athletes respond well.

“It’s a great group of kids. We’re fortunate to have a super group at Napanee. The kids are really respectful wherever they go and they act really mature. They’re really representing Napanee and NDSS at its fullest.”

As someone who has enjoyed sports his whole life, the coach said it’s nice to see the teamwork displayed.

“They play hard together, they have a lot of fun together and it’s enjoyable to watch.”

Walker said NDSS also hosts a qualifying floor hockey tournament annually, which provides the community a great chance to see competitors from across the region give their all.

Basketball player and Grade 12 student Melissa Goodwin said she’s “really excited” to be going to Toronto for basketball this year, noting that hours of practice against Greater Napanee Emergency Services employees has helped her team prepare well to contend on the larger stage.

Another veteran of the program, Jacob Hutchings, is returning to the provincial level for soccer, his favourite sport, though he’s also competed in basketball and floor hockey. He says team play will be key.

“It’s good to have a team that’s bonded together for soccer. It’s like that in any sport, you need friends to count on each other.”

Looking around,      Hutchings said he was proud to see the amount of NDSS athletes that qualified and also pleased to see others that participated in sport in some way this year.

Walker said the athletes and coaches are thankful for the backing they receive.

“The community provides a lot of help and funding so it’s affordable for these athletes. They hardly have any cost thanks to the fundraising and support from the community and that makes sport possible.”

French said the annual Law Enforcement Torch Run for the Special Olympics fundraiser will again take place in May, though a date has not yet been set. The OPP, the Quinte Detention Centre, the Bath Institution, Greater Napanee Emergency Services and Lennox and Addington County Paramedics staff all participate in the activity.