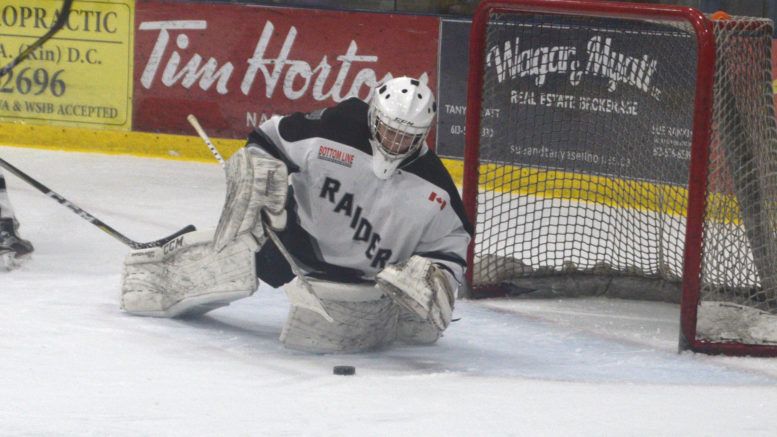 Bailey Maracle had been flawless heading into last night’s Game 4 in Port Hope, delivering three straight shutouts to put the Napanee Raiders up three games to none in the Tod Division’s best-of-seven semifinal.

The Deseronto native goalie had turned away all 40 shots he’d seen through the first three games while his teammates had delivered him exactly three goals a game in support for three straight 3-0 victories.

On Tuesday at home he stopped 15 shots for the victory. Evan Foley opened the scoring at 5:51 of the first followed by Brodie Maracle at 9:13.

Foley added his second of the game at 9:07 of the second, the final goal scored by either team on the night.

In Friday’s series opener Maracle was tested 13 times, blocking all shots while Kent, Matthew Panetta and Mroueh each had a goal in the first, second and third respectively.

The three straight shutouts match the total Maracle recorded in 22 games in the regular season, where he went 18-3 with a 1.71 goals against average. He’s been more than the team could have hoped for, filling in for the injured Nicholas Nabuurs who is expected back within the next week, possibly even in this series.

Down at the other end of the ice Port Hope’s Curtis Laviolette has been strong, allowing three goals a game to the league’s most powerful offense, making 128 saves through the first three games.

If the Raiders were unable to close out the series last night, Game 5 will go tomorrow night at 7:30 p.m. at the SPC. Game 6 would go Saturday in Port Hope with a winner-take-all Game 7 set for Sunday at 7 p.m. at the SPC.

If the Raiders are able to close out the Panthers, it would mark the first time Napanee has topped Port Hope in a playoff series since 2011, having lost three straight meetings in 2015, 2016 and 2017. It would also be a huge step forward for the Raiders, who last year were rather unexpectedly knocked out in the first round against the Amherstview Jets.

The Jets meanwhile have their work cut out for them in their best-of-seven semifinals against the second seeded Picton Pirates. The Jets rallied for a 5-2 win in Sunday’s Game 3, but still trail 2-1 in the best-of-seven series.

Game 4 was scheduled for last night in Amherstview. Results weren’t known at press time. Game 5 will go Thursday in Picton with Game 6 in Amherstview and Game 7 in Picton Sunday, if necessary.