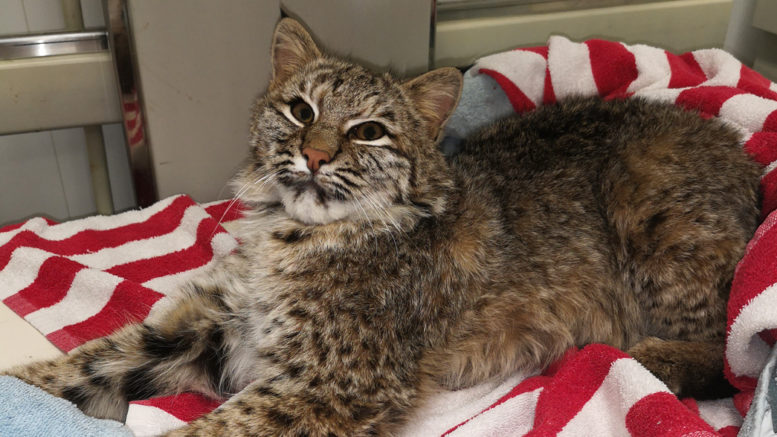 Bob the bobcat, one of the more famous patients to come to SPWC. File photo.

Critters of all sizes and species have been treated at Sandy Pines Wildlife Centre over its 25 years of operation, but never had they rehabbed a bobcat.

Until last week that is, when longtime SPWC supporter Laurie Paquin found a stunned bobcat at the side of the road in Lansdowne, showing signs of having been hit by a car.

The bobcat, affectionately named Bob after longtime SWPC Bob Cox who passed away earlier that Friday morning, was loaded into the woman’s car and rushed to the Napanee animal rehab centre.

“He had head trauma, we weren’t sure about spinal trauma,” said Leah Birmingham, assistant director and licensed wildlife custodian with SPWC. “He couldn’t fully right himself and I could feel some swelling around the vertebrae. The next day he had already come around enough that in order to do x-rays one him we had to sedate him.”

Had he not gotten medical care quickly, he likely wouldn’t have survived the night. Once stabilized, they took him to their onsite x-ray machine the next day.

Somewhat surprisingly the x-rays actually showed positive signs as Bob had no spinal damage or fractures. Birmingham says it’s quite common for an animal to suffer damage to its pelvis when struck by a car, but that wasn’t the case in this instance.

“He’s a young guy so everything about him looks good, nice teeth, his bones,” said Birmingham. “It was pretty exciting for us to be dealing with a new, rare species. We were pretty relieved to see all (his x-rays).”

Birmingham says treating the bobcat was a career highlight, though it brought about some challenges when assessing him. Bobcats are about three times the size of a domestic cat and are known to move quickly and pounce with sharp claws and teeth.

“I’ve dealt with adult racoons and coyotes,” she said. “He’s still a little more intimidating than him.”

Even his eating habits were a bit spooky. The staff at SPWC have been feeding him roadkill, which they do with their predator patients. Unlike the other meat eaters at the centre who will typically just pick away certain parts of their dinner, Bob ate the entire rabbit and left no trace.

They kept Bob at the centre for just over a week to ensure he had no internal organ damage. The prognosis was looking good and the staff planned to release him near where they found him this weekend.

Along with treating new patients, SPWC also has a pair of fundraising events on the horizon. This Sunday they will be hosting a Paint Night at Kingston’s Don Cherry Sports Grill, located at 692 Princess Street. Tickets are $40 a person with $15 from each sale going to the wildlife centre. Tickets are available at www.purposefulpainting.ca/join-a-paint-night or call 613-922-2200.

The weekend of Feb. 8-10  at the Frontenac Mall in Kingston they will be holding their 14th annual Art and Jewellery Sale with over 1,000 pieces of vintage, estate and costume jewellery for sale.