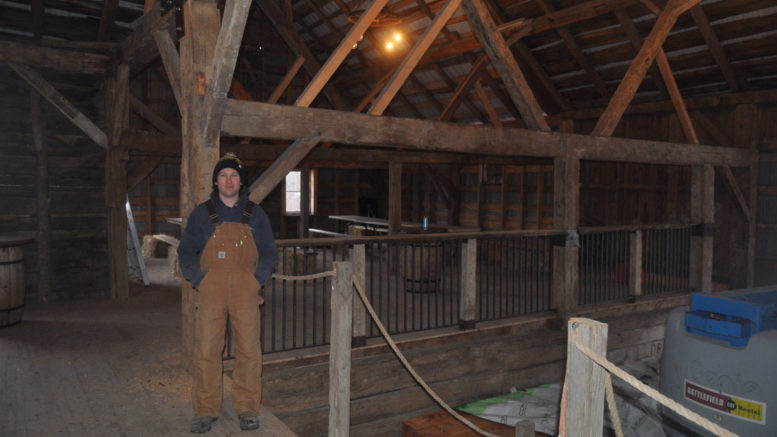 Ivan MacKinnon shows off the inside of a barn he believes was built around 1850 that will soon be able to host events such as weddings and markets, thanks to Loyalist Township's approval of a rezoning request. (Adam Bramburger/staff)

Loyalist Township council showed it is open for agri-tourism business Monday by unanimously accepting a zoning change that would allow for an assembly hall in an existing barn at a Bath brewery.

Last August, Ivan MacKinnon of MacKinnon Brothers Brewing Company applied for permission to use the main floor of his barn to host events such as music, weddings, corporate functions, and farmers’ markets after learning the events weren’t permitted under the zoning the County Rd. 22 property that allows the craft brewery to operate as a complementary use to farming.

According to a Dec. 19 report by approvals planner Trudy Gavel, while the brewing operation is permitted under the property’s Prime Agricultural Exception 4 (PA-4) zoning, the Provincial Policy Statement (PPS) recommends limitations on “on-farm diversified use” operations that are not specifically agricultural uses, such as agri-tourism or value-added offerings.

A guideline in the PPS suggests on-farm diversified use be limited to no more than two per cent of a farm property and the gross floor area for those operations only 20 per cent of that space. 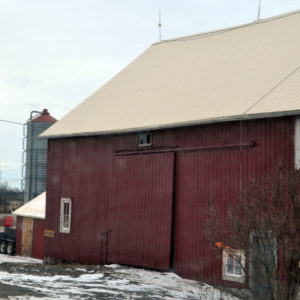 The MacKinnon Brothers Brewing Company on County Rd. 22 will soon be able to host a greater range of events in this barn, a move supporters say will offer new economic opportunities to area businesses. (Adam Bramburger/Staff)

In MacKinnon Brothers’ case, Gavel’s report recommended the zoning change be denied. She indicated the conversion of the barn would push the company’s on-farm diversified use past two per cent, and noted it already has nearly double the permissible related building areas, based on the size of a 21-acre property. Further, she shared a PPS direction that typically banquet halls would not be considered as on-farm diversified.

The report referenced the Lennox and Addington County official plan, which encouraged on-farm diversified uses, but also noted the township’s own official plan did not support the use as it encouraged commercial and industrial business to be located in designated areas to “retain the integrity of agricultural lands.”

MacKinnon appeared before council Monday, encouraging councillors to approve his request. He disagreed with Gavel’s assessment because he said there was no plan to erect any new buildings on his property and he didn’t anticipate the usage of the barn to change greatly. At present, he said, it’s a dry storage for the brewing operation. Even surrounding outdoor lands that would be converted to gravel to support the facility, he said, have shallow soil that’s not suitable for cropping.

“If we weren’t using this for the brewery operation, it would sit idle. We’re not taking away good farmland with this change and the same goes for the existing barn. It holds very little value to a modern field-cropping operation and, if not for this diversified use, it would likely run to ruin as many old barns in the area have.”

MacKinnon said many agriculturally-zoned wineries in Prince Edward County have found success as event venues and that municipality has managed find ways to support their operations through its own bylaws. He envisions that, like those establishments, the event business will allow his business to expose more people to agriculture.

He also said his family farms close to 1,300 acres, significantly more than the 21 used in the calculation.

With his initial application, MacKinnon forwarded letters of support from township businesses and individuals. Again, Monday, there were two speakers who came forward to speak in support of the plan.

One was Lorna Willis, a mayoral candidate last fall. She reminded councillors of a campaign promise.

“Mr. Mayor, you and council have expressed a sincere desire to promote economic growth in the township. One barrier to that is a lack of appropriate indoor spaces for markets, cultural events, and weddings,” she said. “Every millennial wants to get married in a barn right now. MacKinnon Brothers’ proposal is one that will draw such events to the township, creating opportunities for local businesses such as caterers, florists, performers and artisans.”

She argued the brewery could “be the spark that makes Loyalist Township a destination.”

“Farming is the only business on earth where you buy your inputs at retail prices and sell them at wholesale prices. That’s the traditional model and it doesn’t work any more. It feels like you’re standing in the field and ripping up $50 bills. It’s exhausting,” he said. “Some of the work being done by MacKinnon Brothers we’ve taken great inspiration from. We’re trying to flip the model of traditional agriculture into something that fits in the modern world.”

Tourists have driven retail opportunities for his sheep farm, he said.

A young farmer himself, Ward 1 councillor Nathan Townend said he understood that in recommending denial, staff may have been working to the directive of the PPS guideline, but agreed other parts of Ontario were permitting such usage to their own economic benefit.

“The intent the MacKinnons have is to attract people to the brewery and precisely to appreciate the agricultural dimension of their business. Though it doesn’t abide by the letter of the law, denying this application on the basis that it does not support — and would threaten — agricultural land in the area would ignore, in my view, the MacKinnons and their family and their Loyalist ancestors that have been developing agriculture in that location going on their third century.

“While a lot of land sits idle and grows wild hay and weeds these days, it’s nice to see a farmer with an entrepreneurial spirit. Given the township wants to support small business and economic growth, I think we need to do what we can to support their efforts.”

“I know from my own experiences the MacKinnon family takes every effort when they do an event to do it safely and respect families and timing. I can’t see why they wouldn’t continue to conduct their business with that in mind and be respectful of the community, safety, and bylaws.”

In giving approval, council also imposed a capacity of 100 people in the indoor banquet area for special events and limited farmers’ markets to twice a month, not exceeding 12 vendors at a time.  The limits are based on the capacity of a septic system installed in 2015.  Its bylaw also permits the brewery to move its retail store operations from a converted chicken coop into the lower level of the barn.

On Thursday, MacKinnon told the Beaver he was excited to see the long process come to an end. He said the brewery continues to work with an architect and a structural engineer to complete “minimal” work necessary to convert the circa-1850s barn to host visitors. His hope is to be permitted to start using the site for events as early as this spring.

He said for several years, the brewery has had requests to host weddings and other events it will soon be able to capitalize upon.

“We’ve had to turn a lot of business away,” MacKinnon said.