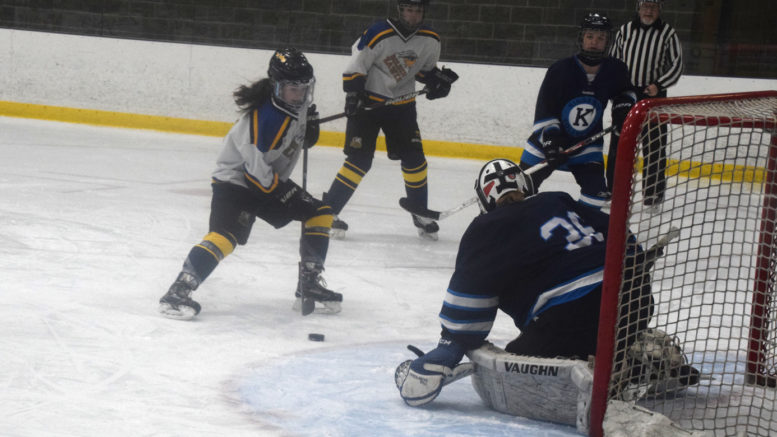 NDSS' Maddy Cronkwright skates in close on KCVI's goalie during a KASSAA game at the SPC last season. Photo by Adam Prudhomme.

The NDSS Golden Hawks girls hockey team entered the exam break on a high note as they blanked the visiting KCVI Blues 7-0 on Wednesday afternoon at the SPC.

Maddy Cronkwright opened the scoring for the Hawks. Amber Weese doubled the lead when she collected a big rebound in front of the net, her first of a two goal afternoon. Megan Morrow added one late in the period to give the Hawks a comfortable 3-0 lead heading into the first intermission.

Lauren Sutton and Payton Hutcheson each found the back of the net in the second while Maddie Marlow and Weese capped off the scoring with one each in the third. Scoring was spread out throughout the lineup with six different players recording a goal. Kylie Morrow picked up two assists while Anna Baker and Hailey Thompson each had one.

“It was good to get one more game before the break,” said Hawks coach Matt Campeau. “It was a good effort. Lots of scoring from lots of places.”

Being so close to the high school’s first semester exam season, the Hawks were without some of their older players.

“We had a couple of senior players not here and it gave some opportunities for our younger players to try different combinations and they stepped up,” added coach Chad Miller.

Kallysta Noyes earned the shutout for the Hawks, the first of her KASSAA career.

“It’s good for her confidence to get in there and get a sense that she can stop the puck,” added Campeau.

The win pushes NDSS’ record to 5-0-1 on the season and assures them of home ice advantage in the KASSAA quarter-finals.

When the season resumes in February the Hawks will have two important road games to wrap up the regular season with important playoff seeding implications. They’ll face Holy Cross on Feb. 4 and La Salle on Feb. 7 with the playoffs scheduled to begin Feb. 19.

NDSS’ boys hockey team will hope to use the exam break as a chance to regroup following a 5-1 loss to Holy Cross. They’re now 2-3 on the season, currently tied for fourth in the KASSAA standings.