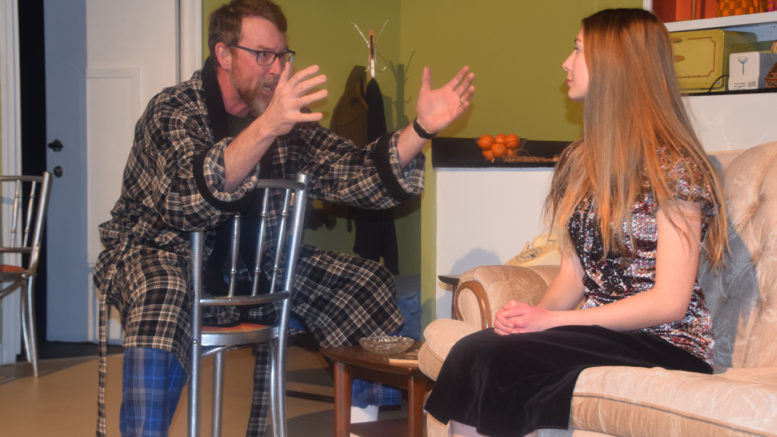 David Cossaboom, in the role of Herb Tucker, has a heated discussion with Teagan Burns, who plays his daughter Libby in the up coming production of I Ought To Be In Pictures. Photo by Adam Prudhomme.

Drama will be mixed with a dash of comedy in Lennox Community Theatre’s production of I Ought To Be In Pictures, which debuts in Selby on Feb. 1.

“It is the story of a young woman, Libby Tucker, who has come cross country from New York to California to meet her father from whom she’s been estranged for 16 years,” said play director Maureen McDonald. “This is the story of that return and what they go through trying to come together as a father and daughter.”

Libby, who is played by Teagan Burns, is an aspiring actress who dreams of being on the big screen. That’s why she reaches out to her father Herb, played by David Cossaboom, who works in Hollywood’s show business in the hopes his connections can help launch her career despite not knowing much about him. Sandy Johnson plays Steffy, the on again/off again girlfriend of Herb.

Written in 1979, the play debuted on Broadway the next year and was made into a major motion picture in 1982 starring Walter Matthau and Ann-Margret.

For McDonald, directing the play has been a long time coming as she had originally suggested staging the play years ago while on the board of the Lennox Community Theatre. When she heard they would be doing so this season, she jumped at the opportunity. It also comes as a nice tribute to the play’s author Neil Simon, who passed away last August at the age of 91.

“Neil Simon was a comedy writer,” says McDonald. “(The play) is not farcical. There’s some pretty good laughs in it but it’s a serious play. It explores some really interesting human issues. It’s both funny and kind of dramatic at the same time.”

All three of the play’s stars have appeared on stage in Selby before.

McDonald says the play is appropriate for all ages, though cautions there is some ‘light swearing’ by some of the characters.