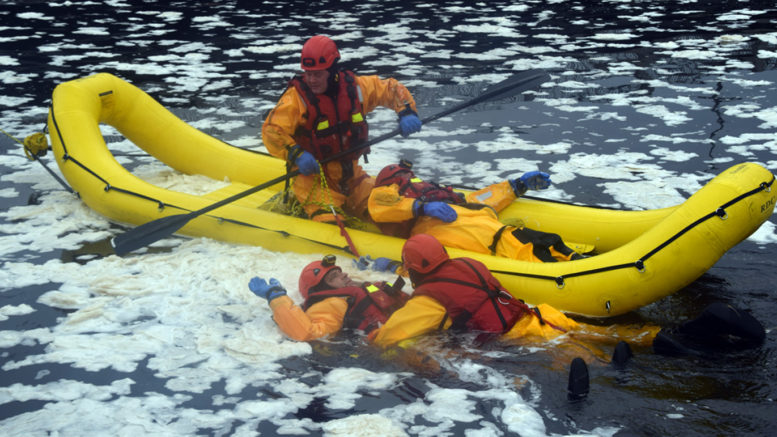 Members of Greater Napanee Emergency Services practice an ice water rescue on the Napanee River on Sunday morning. GNES staff are anticipating a busy winter as the weather has been unpredictable thus far, leading to unstable ice throughout the region. Photo by Adam Prudhomme.

Greater Napanee Emergency Service (GNES) members plunged into the icy waters of the Napanee River this weekend, training for various water rescues they may have to perform this winter.

Though not quite frozen over firefighters dressed in full water-gear used the water at the Centre Street boat launch for a series of training drills, held Saturday and Sunday. The temperature hung around the freezing mark with large chunks of ice floating in the water.

“The person’s fallen through the ice but there’s a large body of water. We have to have our rescue personnel make contact, put a buoyancy ring, called a rescue sling, on the patient and then the line tender who are on the shore will pull them into a safe area that we can retrieve them out of the water and onto the shore.”

That exercise required one member of the team to play the role of a patient, lying on a piece of ice or in the open water while another member jumped into the water and swam out to the member pretending to be in danger. As part of the exercise, each member of the crew had the chance to be the rescuer and rescuee.

The second drill involved the use of a Fortuna boat. Those in the boat had to deal with the challenge of rowing through chunks of ice to reach the members in the water.

“It’s a rapidly deployed raft, it takes one cylinder and less than a minute to fill,” said Hammond. “It keeps the rescuers out of the water. (Going into the water) is higher risk because of the entrapment and currents. The boat will allow them to get out and get more than one patient.”

Jumping into the water is seen as a last resort for the firefighters, but one they need to be prepared to do on any water rescue call.

“We use a rescue progression, talk, reach and throw,” said Hammond. “If we can’t talk them out of the water, we can’t reach them or can’t throw something to them then the last two are row the boat or go and go is the most riskiest thing for a firefighter to do, but it is the most efficient.”

Before getting into the water, each GNES firefighter had to do two weeks of classroom training, studying theory, hydrology and learning about ice forms and what to look for when determining the strength of an ice surface.

All told about 33 members of the team will be certified to take part in an ice water rescue following the intense training session.

Hammond says they’ve already had to stage a handful of actual ice water rescues within the last calendar year and expect to see more in the coming months.

“This season specifically, the ice conditions have been up and down because of the freeze and thaw cycle,” said Hammond. “For us it’s about being proactive, to start training now instead of waiting until January when it’s really cold and there’s solid ice that we could work off of, we need to do this (open water) as well.”