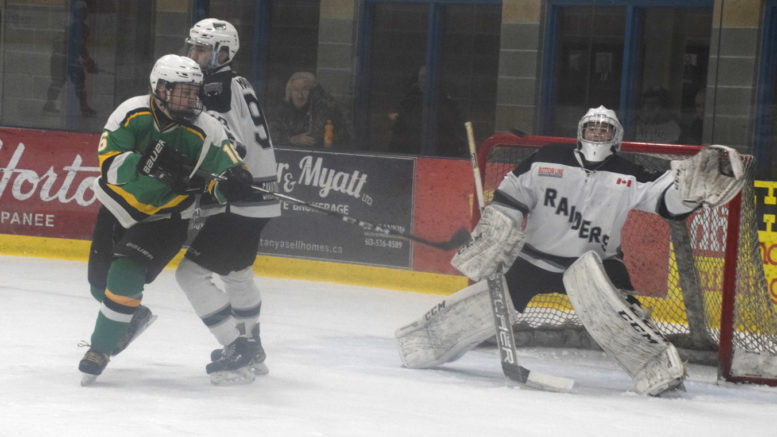 Amherstview's Blake Hogle reaches his stick out in an attempt to deflect the flying puck while Raiders goalie Bailey Maracle attempts to catch it during Friday's game at the SPC. Photo by Adam Prudhomme.

Kryptonite and the road jerseys for the Amherstview Jets-both are bright green and both have an unmatched ability to overpower otherwise unbeatable entities, be it Superman or the Napanee Raiders.

On Friday the Jets put on their kryptonite coloured sweaters and topped the Napanee Raiders 3-1 at the SPC, snapping the Raiders’ 21-game unbeaten streak. In doing so the Jets became the first visiting club to escape the SPC with a win this season, though they did battle the Raiders to a 3-3 draw in Napanee back on Sept. 28.

For their part Napanee responded well to the loss, which was just the third game in 26 played this year in which they failed to record a win. They rebounded just 24 hours later with a 5-2 road win over the Little Britain Merchants.

On Saturday Ryan Casselman and Brady Rawn each scored for the Raiders in the first to build a 2-0 lead after one. For Rawn, who made his debut the previous night, it was his first goal with the Raiders.

Evan Foley scored two minutes into the second for a 3-0 lead, only to see Little Britain’s Cameron Robinson and Devon Truong strike with a pair of goals within a five minute span to cut the lead to 3-2. Cullen Hinds scored a huge momentum-shifting power-play goal in the final seconds of the period to give the Raiders a two-goal edge heading into the final intermission. Casselman tacked on an insurance marker at the 4:44 mark of the third and Raider goalie Nicholas Nabuurs shut the door from there to halt the losing streak at one. He finished the night with 25 saves.

The five goal outburst was a stark contrast to the previous night, when Amherstview goalie Jacob Evans completely shutdown the league’s top offense, holding them to just one goal on 35 shots.

That one goal, which was provided by Hinds on the power-play just 53 seconds into the second, was a notable one as it touched off an avalanche of stuffed toys from the crowd onto the ice, as per the annual teddy bear toss tradition. The toys were then collected by the players and will be donated to the Salvation Army. 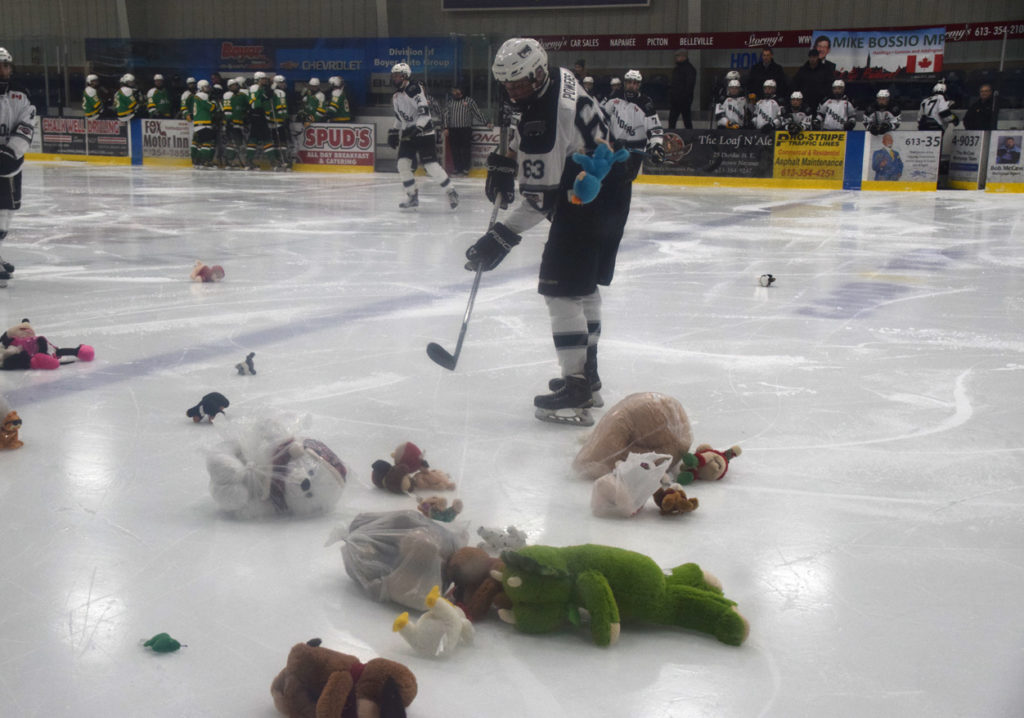 Napanee’s Nelson Powers collects teddy bears that were thrown on the ice as part of the team’s annual Teddy Bear Toss game. Photo by Adam Prudhomme. 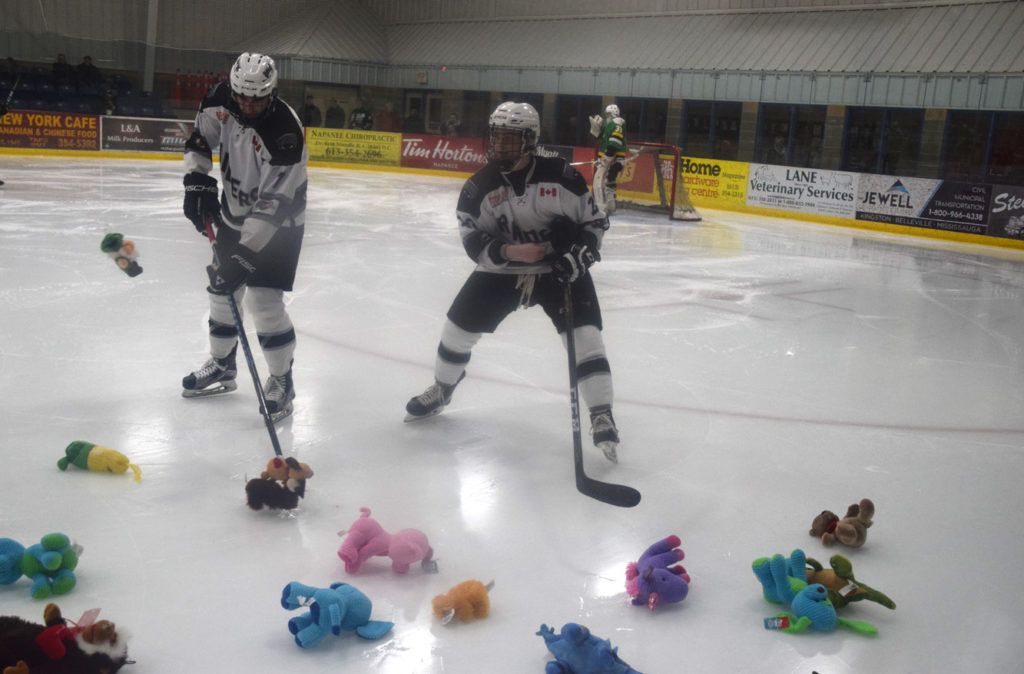 Toys continue to shower down onto the ice as Brady Rawn and Evan Foley collect them. Photo by Adam Prudhomme.

Amherstview was 1-5 on the power-play while Napanee was 1-3.

The upset victory harkened back memories of last February, when the Jets knocked off the heavily favoured Raiders in the league’s semifinals.

While the loss may have been a bit of a jolt to a Raiders team that has suffered little adversity this season, it did little to threaten their perch upon the league’s standing. At 23-2-1, they still hold an eight point lead over second place Picton, who is 19-8-0-1 with two fewer games to play. Amherstview improved to 15-10-2, 15 points back of Napanee. Gananoque is 9-16-1-1, holding down the last playoff spot, though the Port Hope Panthers are closing in a 7-19-0-2, just four points back of fourth. The Campbellford Rebels are out of the picture at 1-27-0-1 with just three points.

Napanee needs just one more point to officially clinch a playoff berth. They’ll look to get it Thursday night when they travel to Picton for a 7:30 p.m. puck drop.

On Friday they’ll welcome the Orr Division leading Kawartha Knights to the SPC at 7:30 p.m. The Knights stand with the Jets as the only other club to defeat the Raiders this year, a 6-3 win at home back on Sept. 22. They are 20-4-0-1 on the year.

Things should be a little easier on Sunday, when the last place Rebels come to Napanee for the final game before the Christmas break and final home game of 2018. Puck drop is 7 p.m.