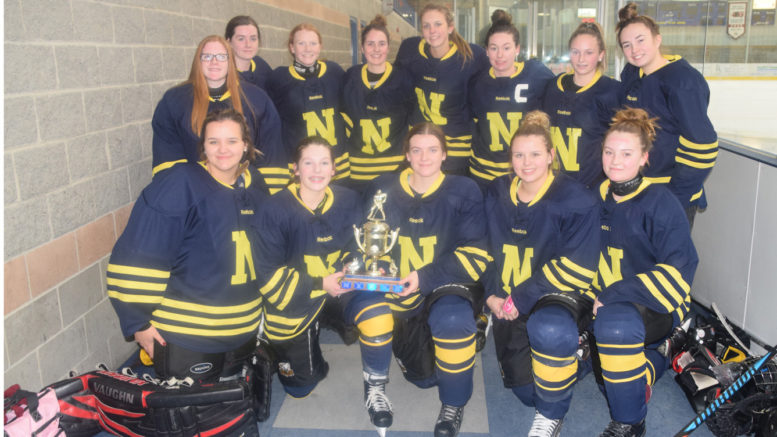 After a one year interlude, the NDSS Golden Hawks Girls Invitational Hockey trophy is returning home.

The host Golden Hawks girls hockey team recaptured the cup after a perfect 4-0 run at the annual tournament, held Thursday at the SPC. Last year they fell to the Holy Cross Crusaders in the tournament finals, halting a two-year reign as champions.

They re-clinched the title this year with a 4-2 victory over the Frontenac Falcons.

“Our name wasn’t on it last year, so to get it back was important to us,” said Hawks coach Matt Campeau.

Early on in the final it looked as though the Hawks might cruise to victory as Maddi Wheeler, Maddy Cronkwright and Payton Hutcheson each notched a goal in the first period for a 3-0 NDSS lead at the first intermission. For Hutcheson it was her first career high school goal and it proved to be a critical one. The Falcons soared back with two goals in succession, the first on the power-play and the second within a few minutes to cut the lead to 3-2. 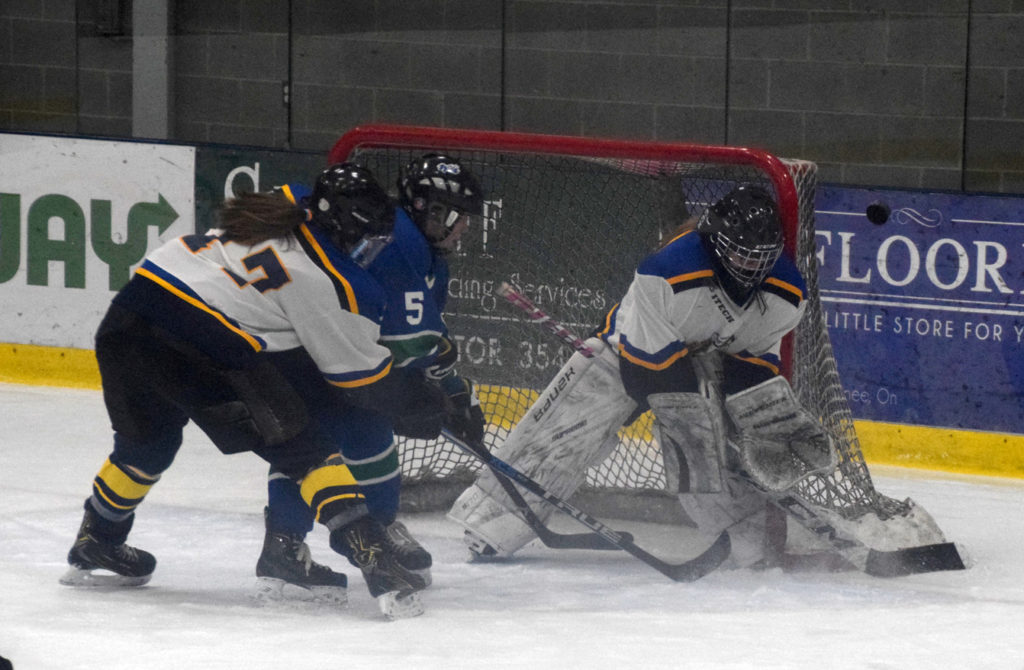 Hawks goalie Makenna Marlow shut the door from there and turned away several Falcon attempts to tie it up and Wheeler sealed the win by rifling a shot into the top-corner early in the third as the Hawks hung on for the 4-2 win.

“To bend but not break is key,” said Campeau. “That’s a good lesson. I don’t think we’ve seen the last of Frontenac.”

A possible KASSAA league playoff meeting in February could make for another interesting matchup.

While the Falcons made for a tough opponent in the finals, the Hawks’ hardest fought win actually came in their final game of pool play, which they needed to win to assure themselves a spot in the finals.

Facing off against the St. Mary Catholic School Thunder, the Hawks had to rally from a 1-0 third period deficit with just eight minutes left in the game. Captain Wheeler stepped up to save the day, skating in alone and beating a sprawled out Thunder goalie to tie the game at 1-1. 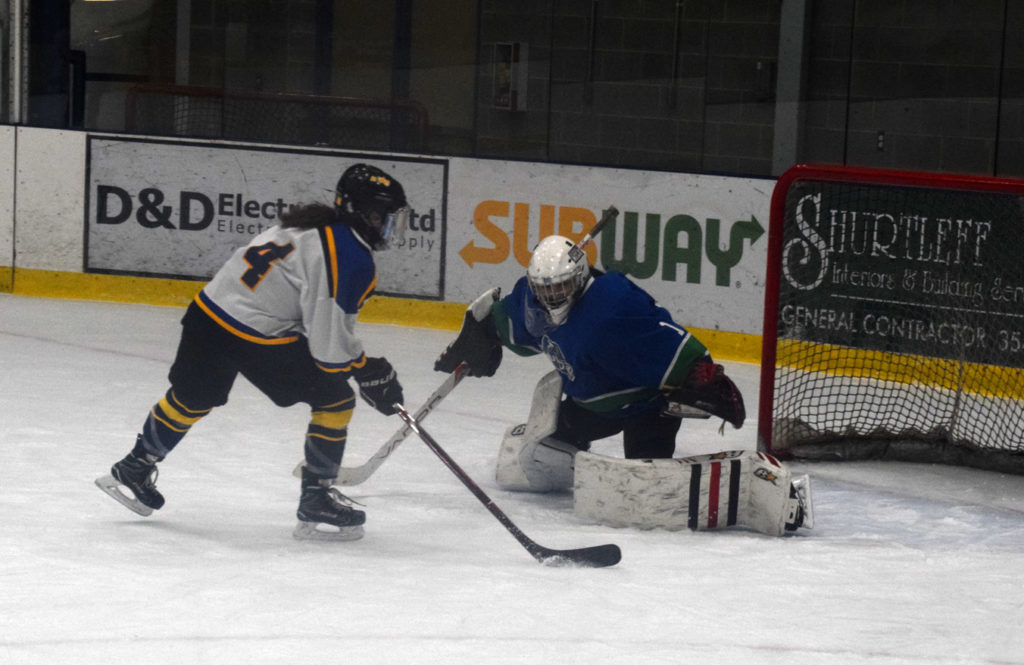 NDSS’ Maddy Cronkwright skates in for a shot during a shootout. Photo by Adam Prudhomme.

Marlow was strong in net, turning away several chances on a 5-on-3 power-play to send the game into a shootout. Wheeler once again played the role of hero, waiting out the Thunder goalie and tucking the puck around the keeper who committed just a little too soon. Marlow stopped all three Thunder shooters to make Wheeler’s goal stand as the game winner.

NDSS opened the tournament with a 4-1 win over La Salle. Anna Baker, Wheeler, Cronkwright and Kylie Morrow each had a goal with Maddy Marlow, Cronkwright, Wheeler and Megan Morrow earning assists. 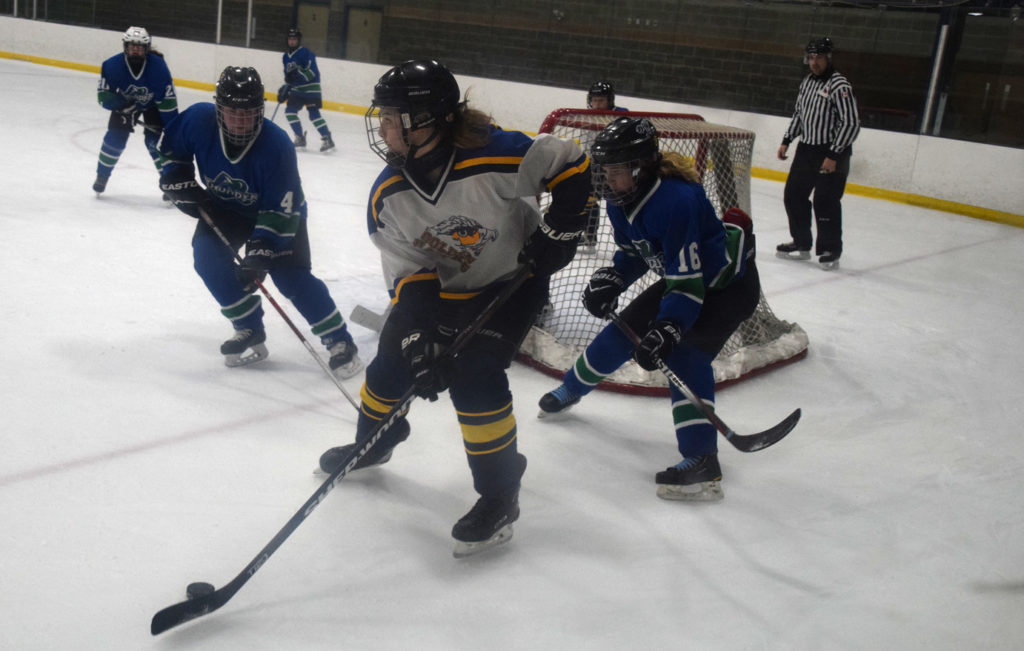 NDSS’ Payton Hutcheson looks for an open teammate from behind the Thunder net. Photo by Adam Prudhomme.

In their second game they topped Thousand Islands Secondary School 7-2. Wheeler, Hailey Thompson, Megan Morrow, Liv Fenwick and Nikki Weese each had a goal while Cronkwright had two. For Thompson and Weese, it was their first career goals with the Hawks.

Capturing the tournament could serve as a great team building experience as the Hawks turn their attention towards building on their 2-0 start to the KASSAA season and a run at a league title in the new year.

“We’ve got four Grade 9s in the lineup, so seeing what they can bring, you never really know until you play a couple of games,” said Campeau. “We’re really pleased with those kids. Makena was lights out in the shootout to get us (to the finals) and a couple of Grade 9 forwards and one that plays forward and defense. We had a couple of kids leave (after last year) so having those four kids come in has been big and we’ve got a lot of talent up front with Wheeler and Cronkwright.”

The coach says Wheeler in particular turned in a strong tournament and he was impressed with the captain’s leadership to help guide them to the championship. 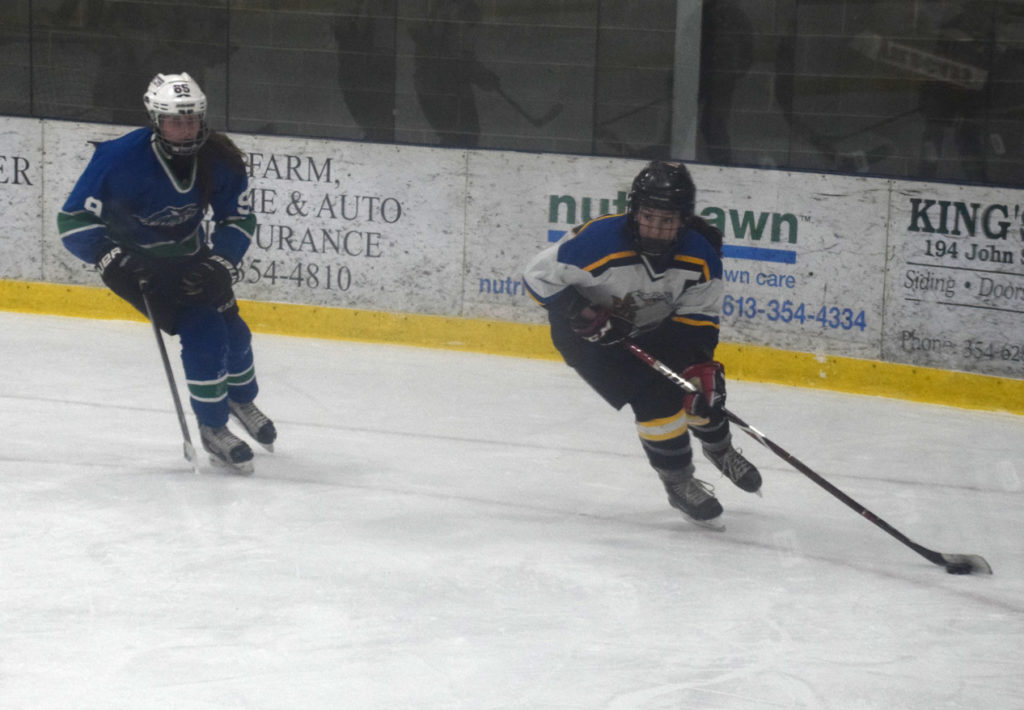 Hawks captain Maddi Wheeler scored both goals in a 2-1 shootout win in the final game of pool play and then added two more in the finals. Photo by Adam Prudhomme.

“Today you can see why she made the U-18 Team Canada roster,” Campeau said of Wheeler. “We’ve had some very good players over the years but she is setting the bar with her skill, determination and leadership.”

Winning the tournament could also help to boost the confidence of the rest of the team as well as they continue their KASSAA season.

“Confidence is so huge in everything, especially sports,” said Campeau. “You get those kids who weren’t sure they were going to make the team a month ago, now know they belong. That’s big for us. You can’t win a game with one player, to go a long way in any sport you need a deep team and we got to see a little more depth than we thought we might have.”

The Hawks will return to league play on Wednesday when they host the Ernestown Eagles at 3 p.m. at the SPC. That will be their final game before the Christmas break.