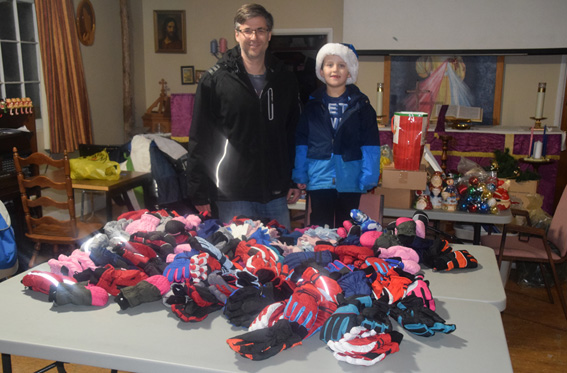 For a third straight year, Owen Hewett has donated mittens to those who would otherwise go without this winter.

That represents over half the Napanee native’s five-year-old’s life dedicated to giving.

On Wednesday he delivered $570 worth of mittens to the Morningstar Mission, which will now be doled out to kids in need.

The young Hewett began his quest to collect for the less fortunate when his dad urged him to wear his own mittens. When he refused, his dad pointed out how lucky he is to even have mittens as many who wish they could wear them don’t have any to put on. That message hit home for Hewett, who then took it upon himself to take any money he received throughout the year to go towards purchasing mittens.

He’s since received some help from the community, with those who recognize him from last year’s donation giving him some dollars towards his cause. When it came time to make this year’s purchase the local Giant Tiger chipped in as well, offering him not only a 15 per cent discount on all mittens purchased, but also contributing $50.

This year’s donation made, Hewett says he plans to get right back to collecting money for next year. He has no plans of slowing down anytime soon either, proclaiming he plans to keep on donating mittens to worthy causes until he’s 75-years-old.