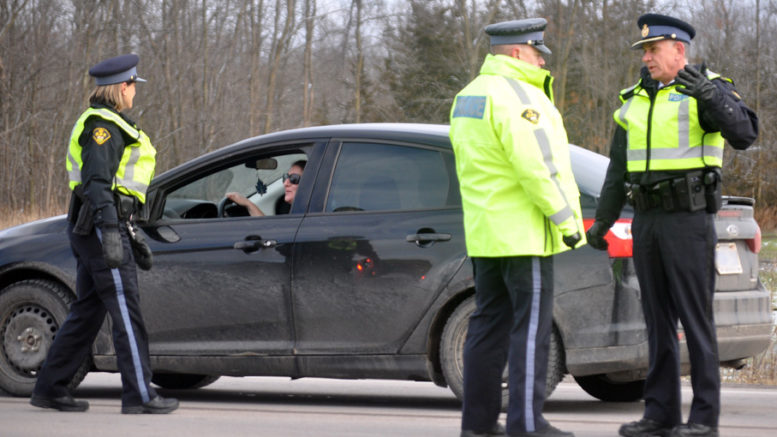 As the calendar turns to December, many start thinking ahead to hosting and visiting festive gatherings. At the same time, police and medical workers turn their thoughts toward safety.

Particularly in light of Canada legalizing cannabis, Oct. 17, Oglaza is reminding motorists that the mix of alcohol and cannabis can be a deadly combination when it comes to impairment. Regardless of the factors of impairment, he’s hopeful residents will make smart choices.

“While people are coming into the holiday season, they might want to enjoy themselves, have a party, and have a drink or use cannabis. Our very strong message is ‘Do not drive after that.’ Speak up if somebody you know is trying to get in the car after you know they have been using alcohol or cannabis. If you’re hosting a party, plan ahead to make sure people aren’t leaving your party and driving impaired.”

Insp. Scott Semple of the Napanee OPP said there are several alternatives.

“Be cautious. Plan ahead. Use a designated driver, take taxis, or just stay overnight. Have a good time, but don’t be on the roads. Impaired driving is impaired driving — alcohol, cannabis, prescription drugs, they’ll all create impairment and can put you at risk and put everyone else on the road at risk.”

Semple said his detachment has a big role in keeping people safe as it polices all of Lennox and Addington County, several roads in Hastings County, and 80 km of Hwy 401. He said officers take that role seriously.

“We’re going to be very strategic this holiday season. You’re going to see RIDE programs on the main thoroughfares, but we’re also going to be on those side roads and back roads in areas where people think we’re not going to be,” he said.

Semple said police realize that Hwy 401 traffic isn’t just people passing through the area, but it is also a major route for commuters between Kingston and Belleville. With that in mind, he said the OPP will be setting up RIDE checks at off-ramps and it will also be using On Route centres and truck stops.

“We’re screening for impaired drivers that happen to be operating commercial motor vehicles.  We’re putting that community on notice as well. If you’re a professional driver operating a commercial vehicle, the law has now changed to where there’s zero tolerance. You can’t have alcohol if you’re a commercial vehicle driver. We expect people to adhere to that.”

With regard to marijuana, Simple said impairment by drug is not a trend police have been seeing since October, but he suspects as it becomes more mainstream, it could become a bigger issue.

Prince Edward OPP Staff Sgt. John Hatch said the numbers mete out Semple’s assertion. He said across the OPP’s East Region, there have only been four such charges laid since legalization. Still, he says impairment continues to be an issue, regardless of the source of that impairment.

“From a Prince Edward County perspective, our impaired driving is up 20 per cent this year. I don’t know what that is, but I want to reinforce that we want to reduce that number.”

Hatch says it comes down to personal responsibility.

“For yourself, if you suspect you might be impaired through something you’ve taken, through drinking or through drugs, the answer is simple — don’t drive. As a passenger, we also want to get out that it’s also your responsibility, if you think the driver is impaired, prevent them from driving or if you can’t, make that call to 911.”

Sgt. Byron Newell of the OPP’s Snow-vehicle, All-terrain vehicle and Vessel Enforcement (SAVE) reminds the public the same offences apply for impaired operation of an all-terrain vehicle or a snowmobile on or off the road.