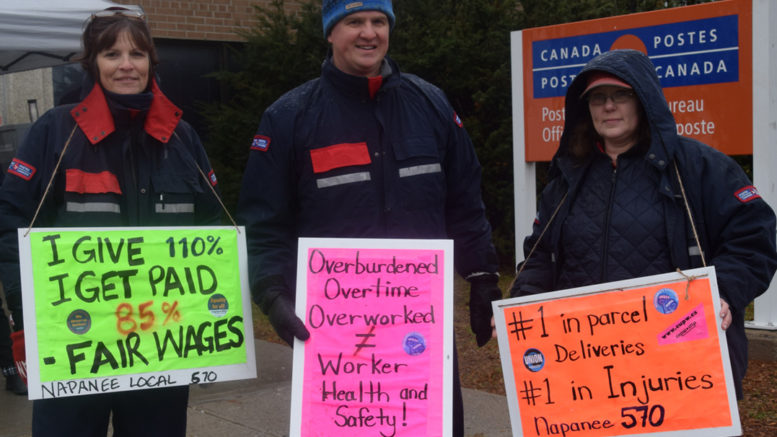 Members of CUPW Local 570 picketed outside the Napanee Post Office on Tuesday to show their displeasure at being ordered back to work by the government. Staff picketed right up until Bill C-89’s noon deadline and then returned to their job. Photo by Adam Prudhomme.

Napanee’s CUPW Local 570 postal workers held one more picket outside the town’s post office on Tuesday morning before returning to work at noon.

The site was similar across the country as postal workers voiced their displeasure right up to the final minute before legislation kicked in, ordering the workers to end six weeks of rotating strikes. Senators voted Monday 53 to 25, with four senators abstaining, to pass Bill C-89, which forces CUPW back to work. The bill carries with it fines of $1,000 to $50,000 per day to anyone found disobeying the ruling and up to $100,000 to Canada Post or the union if they are caught disobeying its terms.

Buxton says workers weren’t pleased to see the government step in and pass the bill.

“It’s sort of like two school kids having an argument and they get their big brother to come in and take over,” said Buxton. “It’s not fair, it shouldn’t have gone down this way. We’ve been negotiating for a year and now all of a sudden they can’t talk anymore. They said they were going to support us and now they’ve completely done the opposite.”

At the heart of the issue is the union demanding better pay and job security, guaranteed hours, equal pay and safer working conditions.

“We want to go home the way we came,” said Buxton. “We want the rural rates to get paid the same as the guys walking the streets. They’re being paid two-thirds less than what we are. There’s no overtime pay for them at all. They’re stuck delivering parcels and after their time’s done, they’re not getting paid for those parcels.”

Though the government ordered them back to work, they didn’t address any of the union’s concerns.

“Now we’re going to go back, we’re going to be out working in the dark, out there doing things that are unsafe and people will be getting hurt, just like they were when we left,” said Buxton. “Nothing’s going to change and we’re right where we started. We’re going to have to sit and wait and see what’s going to happen with arbitration or whatever they’re going to go to next and we will see what happens.”

Though they returned to work Tuesday, Buxton says they plan to continue to fight for what they feel is right.

“It’s not over,” he said. “I don’t know where we’re going to go to next, but we’re obviously not happy. That’s why we’re out here today. If we were just going to put our hands down and walk in today and say everything’s fine, we’d be lying to ourselves.”