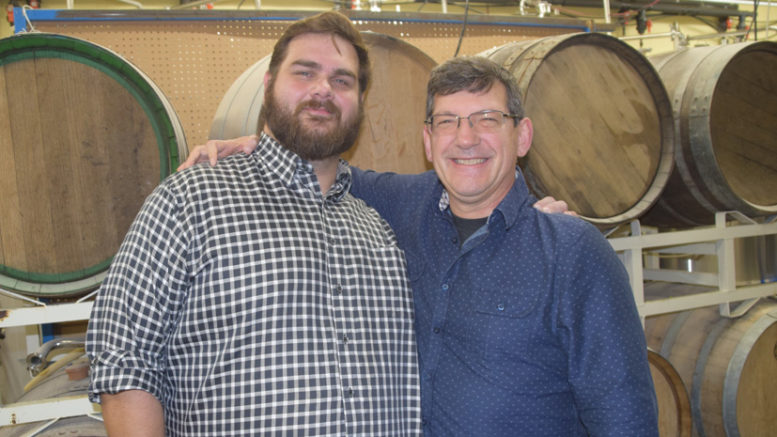 Some good news was brewing for the Napanee Beer Company on Wednesday, as the local craft suds producer was presented with a $5,000 investment through the Federal Economic Development Agency for Southeastern Ontario.

The funding, which was administered through the Prince Edward-Lennox and Addington Community Foundation Corporation (PELA CFDC), will cover half the cost of automated canning machinery that projects to double daily production.

Located at 450 Milligan Lane, the Napanee Beer Company produces four core beers with an ever rotating mix of seasonal beers.

“Our new project that we’re working on is an automated infeed system for our canning machine,” explains Geordan Saunders, founder of the Napanee Beer Company. “It’s going to be locally designed and built. It’s a really exciting piece of equipment that’s going to make our operators’ lives easier, more productive and at the end of the day, more fun.”

Saunders says the equipment upgrade is necessary as they struggle to keep up with the ever growing demand for their award-winning product.

“Right now we have an operator who physically takes cans off the stack, puts them through and loads them,” said Saunders, noting that on a good day they can produce 3,000 cans of beer. “It’s fine, it’s the way we’ve done it for years, but it’s a real bottleneck in production. This new piece of equipment will be worth its weight in gold because it’s going to allow the operator to concentrate on the filling.”

Once in place, Saunders says they expect to be able to produce 6,000 cans a day.

Hastings-Lennox and Addington MP Mike Bossio stopped by the brewery on Wednesday to make the funding announcement.

“I am just so proud of what Geordan has been able to accomplish,” added Bossio. “Indicative once again that great rural minds can do anything and compete with anyone, anywhere and grow their business into something that we can all be proud of. A big part in this was the CFDC. The biggest challenge for small businesses is access to capital. Without our local CFDC we would lose that access to capital because the banks aren’t interested in lending to small businesses because they’ve found easier ways to make money.”

Bossio says the success of the start up company was a prime example of a business thriving in a rural setting.

“The Napanee Beer Company is enjoying runaway demand and serves as a model of how local inputs and know-how can be combined to create jobs of tomorrow and prepare rural communities like ours for the economy of the future,” said Bossio.

With the company name printed on each can, Saunders says each sale is a small advertisement for the community.

“What’s really important to me is that when we’re selling our beer, wherever we’re doing it, it says Napanee on it,” said Saunders. “Napanee is our home. I am so proud of this town. I’m really excited to be just a bit of an ambassador for what we do and who we are as a community. This year we will sell more than a quarter million cans at the LCBO that say Napanee proudly across the top. Next year, probably twice that.”

And while keeping up with demand has been a challenge at time, Saunders says it’s one he’s happy to embrace.

“It’s what my mother-in-law has always called a happy problem,” said Saunders. “It’s certainly a happy problem to need to move more beer. I will never complain about that.”