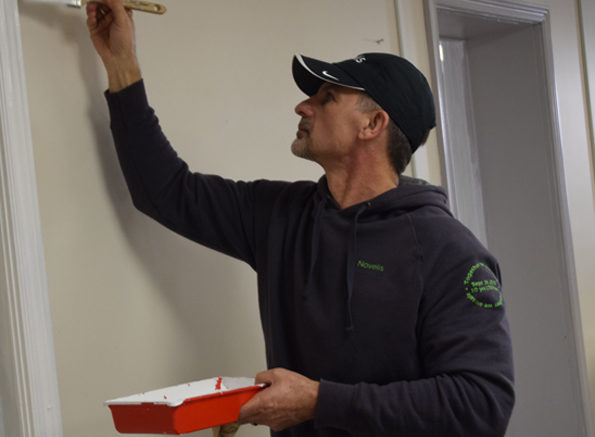 Novelis plant manager Jeff Cruse puts a coat of paint on the newly renovated Memorial Building office space, which will serve as a youth hub. Photo by Adam Prudhomme.

The County Memorial Building received a major facelift last week that will benefit both local at-risk youth and the homeless.

Volunteers from the Kingston-based aluminum manufacturing company Novelis were working in the former KFLA Health Centre all of last week, renovating the upstairs office space and installing a full kitchen unit. Between manpower volunteers and the purchase of kitchen appliances, Novelis donated $15,000 to the cause as part of their annual Novelis Neighbour Week, held in conjunction with the United Way.

Their hard work and dollars means the local United Way is now one major step closer to opening the Lennox and Addington County Youth Hub, which will provide services and supports to at-risk youth.

“We talked about it as a group, we met in September,” Tim            Wisteard, a sponsored staff member from Novelis who oversaw the reno project said of why they selected the L&A County Youth Hub as the charity they would help this year.

“There’s a few places that came to United Way and they gave a list to Novelis. We chose Napanee because essentially there’s nothing in Napanee for the youth. We felt it was a good place to step up, give the youth some place to come after school. With a proper workspace they can teach them about healthy meals. For some of the youth, this may be the only healthy meal they get all day. That’s important for Novelis.”

As part of the renovation the volunteers installed new cabinets, flooring and appliances while giving a fresh coat of paint to the rest of the office.

With plans to open its doors early next year, the hub will serve as a ‘drop-in’ centre for anyone aged 16-25 from 3-6 p.m. on weekdays. The hub will also house several youth agencies, all under one roof which will be available through appointment.

“Once they come into this space they can actually learn about the programs,” explains Bhavana Varma, president and chief executive officer of United Way KFLA. “Youth Diversion will be offering programs, Addictions/Mental Health as well. We’re just working to formalize the programs.”

Among the programs will be healthy cooking classes, which will be held in the newly renovated kitchen. While the drop-in centre will only run from 3-6 p.m., other agencies will have full access to the building space for their appointments.

Meanwhile the Memorial Building’s downstairs units are in the process of being converted into ‘warming stations’ for those with no escape from the harsh winter temperatures.

“We’re going to use these rooms as a warming station in December,” explains Brenda Orchard, Lennox and Addington County’s chief administrative officer. “They can come in, not to sleep, but at least to get a soup, coffee and overnight can at least sit and be warm.”

Unlike the Youth Hub, there will be no age limit on those who will have access to the warming stations.

The station will be overseen by volunteer staff from the faith-based community with Prince Edward Lennox and Addington Social Services providing staff to help oversee its implementation.

Orchard says the warming station is a ‘stopgap’ until the county can devise a more permanent solution to the region’s growing issue of homelessness. She says it came together quickly as the winter months were quickly approaching.

L&A County leased the Memorial Building in early October with $20,000 per year coming from the United Way and $10,000 from the County’s CHPI program.