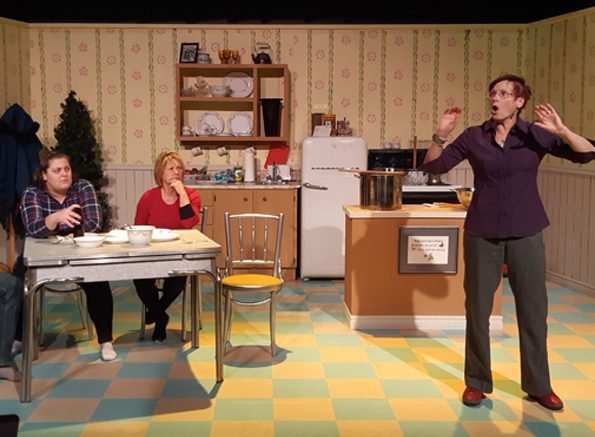 Monica McLeod (right) in the role of Ruth with Colleen Knapp (Beverly) and Jo-Anne Smith (Clara) rehearse for the upcoming showing of Miracle On South Division Street.

Selby’s Lennox Community Theatre will usher in the holiday season with laughter as they stage Miracle On South Division Street, which opens its 10-show run on Nov. 23.

Set in Buffalo, N.Y., the comedy-drama follows Clara Nowak and her family who have always been the focal point of their community ever since the Virgin Mary allegedly paid a visit to her father’s barber shop one miraculous evening back in 1942. Her father then built a shrine of Mary in his shop, which draws visitors throughout the community.

Fast forward to the modern day, Clara is now grown with three adult children of her own — Jimmy, Ruth and Beverly. Their lives are turned upside at Christmas however as daughter Ruth plans to stage a one-woman show about the family miracle when a deathbed confession calls into question everything they’ve ever believed.

“It’s a comedy, but there’s also very poignant parts in it,” said Nicole Butler, who is making her directorial debut.

Playing the part of Clara is Jo-Anne Smith while Monica McLeod plays Ruth, Colleen Knapp plays Beverly and Patrick Mueller is in the role of Jimmy. Jim King is the production’s stage manager.

Butler says she wanted to direct the play after reading the script and falling in love with the Nowak family. Much to her surprise when she reached out to the playwright, Tom Dudzick, he was willing to offer invaluable insight into the play.

“He’s been wonderful,” Butler said of Dubzick, who like the subjects of his play, is based in Upstate New York. “He has offered to give us insight to the characters, he’s offered to tell us a little bit more of the true story of the statue. This story is completely made up, but there is a place from his childhood home in Buffalo that actually has a shrine of the Virgin Mary on the street where people put notes through the slot and give coins.”

Dudzick has even gone so far as to offer help with pronouncing some of the Polish phrases that are written into the play, as the Nowaks are descendants of Poland.

As far as Butler knows, this is the first time a playwright has offered notes to a Selby production. “It made us feel awestruck and special because he is so prolific,” said Butler. “He actually makes a living (writing plays). He’s a well respected, critically acclaimed playwright.”

Tickets are $18 for adults, $12 for children under 12 and $15 for seniors on Sundays and can be bought online at www.lennoxtheatre.ca/tickets. A select number of tickets may be available at the door on the night of the show for cash only.